A Toast The Last Noontime Run 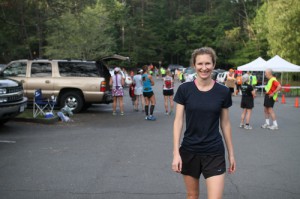 sometimes it’s too hot to mourn

I began the WHM this year in mixed spirits.  On one hand, this year’s race had everything going for it.  My friend Tracy Dahl was debuting as the glorious new RD this year, guaranteeing a class A affair.   I had deliciously fueled up the night before at Jen Ragone’s on her famous cake and pizza.  I was feeling fit and fast compared to last year, when I was still recovering from my August weeks in Asia, from pacing Aaron at Cascade Crest for 8 hours, and had my foot wrapped in tape for my plantar fasciitis.  So I knew that no matter what this year couldn’t be worse than last’s. 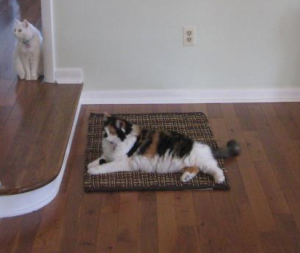 Waddle and her lither mother Clover

But my cat from high school had begun to die that week.  Waddle, the extraordinarily fat kitty that was born under my bed on Mother’s Day in 1999.  She was born obese, and we named her Waddle because she was too fat to walk.  We gave away the other four kittens, but kept the adorably obese Waddle with the button nose.  Waddle was an extremely talkative cat, famous for her meow that sounded more like a parrot squawk.  And for her extraordinary appetite.  But Waddle had stopped eating and we could see her bones through her skin.  I woke up Friday knowing she was not long for the world.  I woke Saturday knowing that I would be able to race, but that Waddle and the sadness of her loss would be weighing on my mind.  But the weather would not cooperate at all with my plan of wearing all black, and Jen rightly insisted that remove the black shirt. 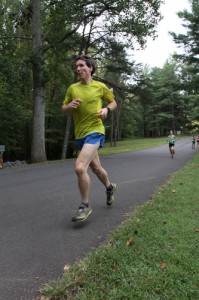 Neal (now Daddy) Gorman leads out the ladies to the trail

After racing neck and neck with Eliza last year, I wanted very much to race alone this year.  I found myself glancing over my shoulder a few times to make sure no one was sneaking up.  I was determined not just to win the race this year, but to enjoy it, to restore the overwhelmingly positive feelings I had about the race in 2009.  So I raced a fine line between keeping a safe lead but not pushing myself so hard that I would really suffer during the hills at the end of the course.  After last year, I just wasn’t in the mood to suffer.  I didn’t care about the time or the record, I just wanted to relish running a race that suits me perfectly: that is lined start to finish with my friends, an out-and-back that allows me to see all the other runners and cheer on my friends, a race that requires a complete runner with speed and strength and nimble feet, a race with woods that remind me of childhood.  I didn’t obliterate any records, I didn’t blow away the field, but I had achieved exactly what I set out to run: a completely restorative race.

a much happier runner

Before I sign off I’d like to point out that Ragan’s performances at the WHM have been extraordinary.  Ragan’s times make her the second fastest woman to ever run the course, surpassing all other previous WHM winners.  Those who will have to race Ragan this fall will have their work cut out for them.

I’d also like to praise Tracy’s debut as the RD — the organization was flawless and vastly improved over previous years.  Thank you Tracy, and we hope you return as RD next year!