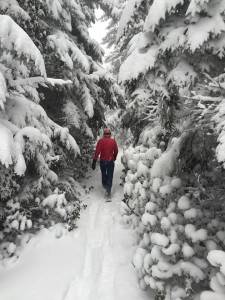 When a historic snowfall is hitting DC, time to hunker down in WV

There are few things as frustrating as trying to keep up with Aaron in snow.  And most of them involve Sean Andrish*.  For me, hacking my way through snow feels like wading through cemented sand.  Somehow Aaron seems to flutter through like a jackass Snow Fairy, his spindly little legs too lacking in surface area to be encumbered.

I have a term for the moments when Aaron’s snow-floating 20 feet ahead of me, as I’m wildly poling to catch up, fogging up my goggles with my perspiration.  I call it ‘Lyming me,’ in reference to the old days when Aaron was stricken with Lyme disease and I’d sometimes run ahead as his gait deteriorated to a slow-motion hobble.  The purpose of the term is to remember that sometimes one person’s pace is just naturally faster, and when Aaron goes ahead I shouldn’t take it personally.  Or have a meltdown.  Or sweat my eyeballs out trying to keep up with him. 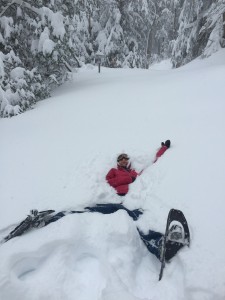 So it was awfully nice to have PJ snowshoeing with us on Saturday, to see that someone far bigger and stronger than I was equally mystified by Aaron’s unearthly ability to snow-float 20 ft in front of us.  In this case, in over 2 feet of freshly fallen snow, PJ and I quickly learned that there is a major advantage of having a Snow Fairy along: breaking trail.

You know that it’s a tough day of trail-breaking when there’s still a sizable difference between being the 2nd person in line and the 3rd person.  For most of the day, PJ and I were happy to let the Snow Fairy lead.  But going up the hills we did a 3-person rotation, peloton-style.  Even the Snow Fairy needed back-up.

Fortunately, Whitegrass does groom many of their main tracks, so we got some hard-packed respites.  With all the climbing out of the way, we got a nice downhill through Springer Orchard.  Now, all I’m sayin’, you know that it’s a heckuva lot of snow when it’s still hard work to break trail going down hill. 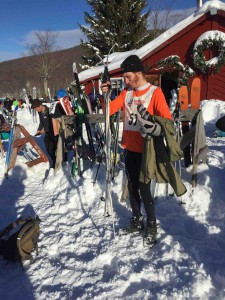 This was all Aaron’s idea

Aaron and I pride ourselves on being lazy bears.  And after a tough Saturday of serious trail breaking, you might have thought that we’d be down for a mellow Sunday.  Little woods, little football…..But I know I’m in for it when Aaron starts quoting the start of Tina Turner’s Proud Mary:

But there’s just one thing,
You see we never ever do nothing
Nice and easy 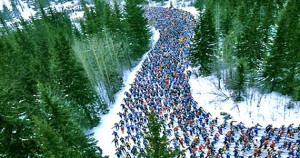 I should’ve seen it coming.  Lately Aaron’s been showing me a lot of clips on YouTube of the Great Vasaloppet 90k in Sweden, the Boston Marathon of world xc ski racing.  A couple WUSsies ago we ran with a Norwegian guy training for the 50k Birkie in Wisconsin.  Must’ve got him thinking.

‘We gotta start somewhere,’ Aaron stated, encouragingly.  The Mountain State Marathon 25km ski race was at least a very low key affair.  But I had not yet been convinced that a 25k ski race of any kind was a better way to spend a day than a lazy jaunt through the woods.  I could in fact think of several reasons why the whole thing was a very bad idea:

But I recognized that it wasn’t just about doing the Mountain State Marathon here in West Virginia.  It was about taking our first step on what will be a long road to the Swedish forests of Vasaloppet.  Now the idea of cross-country skiing in a swarm of 8,000 is only marginally less terrifying than an open water swim was a few years ago.  And I’ve seen how careful Europeans are with personal space and ski poles in the free-for-all chairlift lines of the Dolomites.

And for all the folks who have tried to get me to run MMT….or JFK….or Hellgate, you know how good I am at declaring Marmot OUT.  But something rouses my blood about returning to my native land to participate in their national sport.  I’m half-Scandinavian (Swedish grandfather, Finnish grandmother).  I know the repertoire of the Swedish Santa Lucia Christmas songs by heart (‘Natten går tunga fjät…’).  My great-grandfather, Onni Palonen (1894 – 1932), was a Finnish miler in the 1920s, in the heyday of the ‘Flying Finn’ Paavo Nurmi, an era when Finns were today’s Kenyans of distance running.  Onni died of tuberculosis at the age of 38, after immigrating to Norwood, Massachusetts, just south of Boston, an enclave of Finnish immigrants.  His brother, my great-grand uncle Laurie, was one of the early runners of the Boston Marathon in the 1930s, back when only ~200 men ran it.  Laurie believed that his brother’s illness was related to immunosuppression caused by the brutal training required of Finnish distance runners.  (Nurmi is famous for saying ‘Mind is everything.  Muscle – just pieces of rubber.  All that I am, I am because of my mind.’)  Heartbroken, Laurie quit running altogether.

Onni died a half-century before I was even born.  I wasn’t even aware of his or Laurie’s existence when I laced up to run the mile at the Maryland state championships as a high school freshman.  I still didn’t know about Onni when I  chose running over soccer as a college junior in the New Mexico desert.  It was only years later that my grandmother starting pulling out silver pieces that her father had won at races, whispers of a long-lost legacy of distance running in my bloodlines.  One Christmas my grandmother astonished me with a present of a  diamond engagement ring that Laurie had given to his wife.  My cousin Claire opened a box of towels with a bit of dismay, to which my grandmother clarified that Claire ‘had a boyfriend to give her jewelry.’   Sometimes on a long run, when the woods are still and my mind is quiet, I fumble with the little ring wrapped around my fourth finger and think about the curious ways that families are linked across generations. 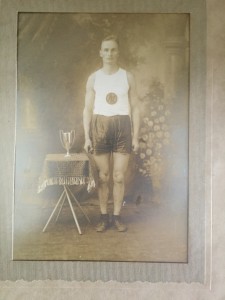 A side of me wishes that Onni knew that his great-granddaughter, a century later, would also be winning races. Onni’s death left deep scars in my family.  He left a widow, another Finnish immigrant (Martha), penniless, and with a daughter (my grandmother).  My great-grandmother Martha scrubbed bathrooms to make ends meet.  Onni also passed the TB to my 12-year old grandmother, and she spent over a year in a sanatorium watching everyone around her die like flies from the disease.  She managed to survive, as you may have surmised from my existence, but still, at age 96, talks of those dark times. 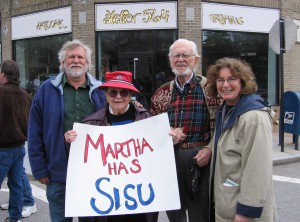 My grandmother holds a sign for me near Heartbreak Hill during my 1st Boston Marathon in 2006.  ‘Sisu’ is a concept at the heart of how all Finns view themselves: having the endurance, tenacity, bravery, and an inner resolve to overcome adversity.

Whitegrass’s Mountain State Marathon was as low-key as promised, a small hodgepodge of a dozen or so ski racers of varying ages and apparent ski experience.  There were a couple of women but they were all doing the 10k option.  The best part of the 25k course was how varied it was, looping far up the mountain through the fir trees and swooping down through the open meadows of Springer Orchards.  It was dark in the forest, but in the orchards sunglasses were obligatory, with the sun glaring off the snow sheets and the bright blue sky. 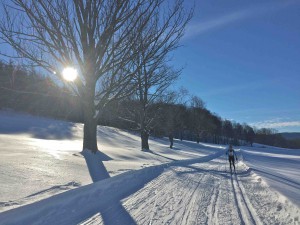 coming in for the finish!

My approach to the ski race resembled my approach to the swim portion of a triathlon: complete recognition that I was entirely undertrained and underqualified, but a determination to cover the distance, no matter how conservatively.  My newbie-ness showed early on, when I totally bit it on the first big downhill and landed on my back in a (fortunately very soft and thick) bed of snow.  Not the easiest thing to pull yourself out of several feet of snow while wearing skis, but I got myself back on course and worked my pizza pie on the rest of the downhills.

Another challenge was eating.  If you think it’s hard to eat while you run or ride a bike, imagine trying to take off your mitten, reach into your back pocket, remove the wrapper from your rice krispy treat, and shove it in your mouth, all while poling with one hand awkwardly grasping two poles.

My arms were jello at the end.  I’m not sure when my hip flexors will function normally again.  But I learned an important lesson out there on the course: I did actually like cross country skiing.  When I’m not trying to keep up with Aaron, I can just relax at my own pace, and get a little bit of a rhythm and a glide.  I finished DFL, but only ~20 minutes behind Aaron (2:06 and 2:29).  And, yes, I was the only woman to go 25k. 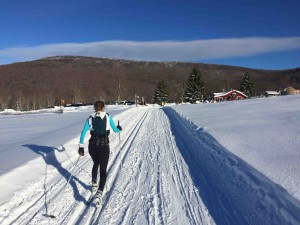 Time for those Nordic roots to kick in

They had a very low-key award ceremony inside the lodge.  Aaron and I came away with some good schwag — a mug, a headwarmer, a picture of Blackwater Falls.  But most of all we came away with confidence: that next time I have to travel to Minneapolis for work we can go ahead and plop ourselves in a ski race. 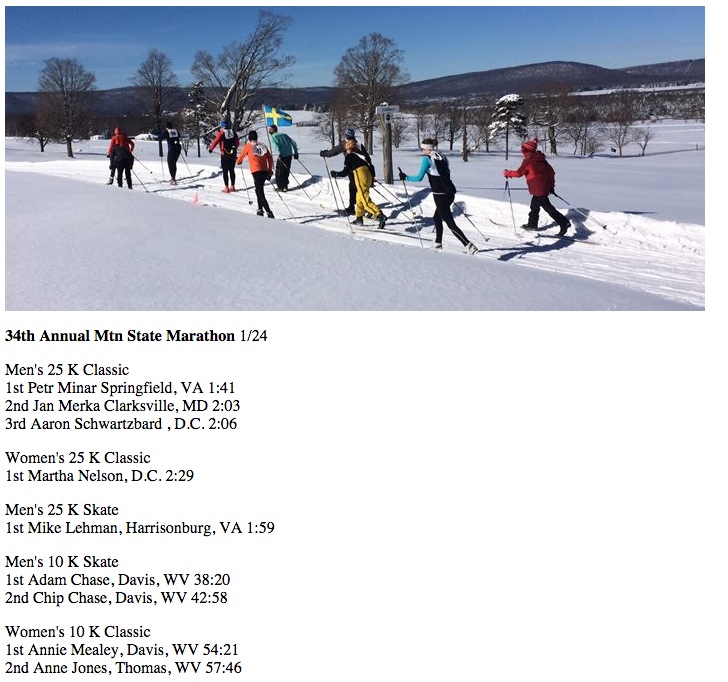 * It has been made apparent to me that my reasons for using Sean as a standard bearer for all these frustrating is not entirely obvious to everyone.  Sean is a wonderful friend but let me explain why he makes me tear my hair out from time to time.  I grew up the daughter of an economist.  That means I lived in a world where children could not always be expected to be purely rational (‘I want to eat the whole apple pie myself!’), but they were expected to listen to rational lines of argument and accept if there were efficient and reasoned ways for behaving differently (‘Eating the whole pie will make you throw up.’)  Sometimes having a conversation with Sean is like pretending the Enlightenment never happened, and we have to fall back into the pre-science dark ages where people used humors and alchemy as their guide.  As an example, Sean and I ran together in Woodley park on Wednesday nights.  For some reason (ostensibly related to bad humors) Sean didn’t run Tuesday night WUS with us.  So every week I’d finagle my schedule (and the schedules of others trying to spend time with me that week) so that I could keep Wednesday night clear for the Sean Run.  At least once a month when I called Sean to tell him I was coming over, he’d say he couldn’t run that night.  I’d probe.  ‘I have to do my laundry.’  Now I’m a regular world-traveler and I understand the art and necessity of doing your laundry before a big trip.  But a trip is not something that arises unexpectedly at 6:30pm on a Wednesday night.  A trip is a fixed event where you can do your laundry the night before and set aside your non-essential running clothes Wednesday night (you know those shorts with the little hole in them you save for just those occasions).  The WUS house was also stocked with these magical things called LAUNDRY MACHINES and automatic dryers that would actually soak and spin and wash your clothes for you while you ran for an hour with your friend.