A very merry fat ass 2013: another year, another chance to try to not f&*k everything up 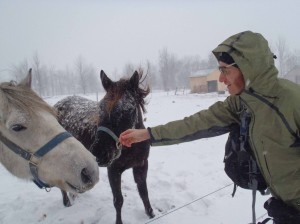 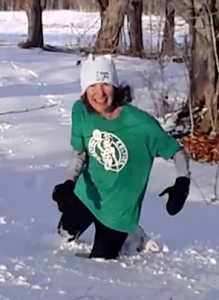 For several weeks leading up to our Christmas holiday in Canaan, Aaron had promised that There would be snow.  And how the Valley delivered!  Nearly 16 inches of fresh snowfall during our stay.  While there were many clear upsides to the snow in terms of winter sport adventure (see pictured, left), unfortunately the poor state of the roads interfered with the Operation Family Time that traditionally coincides with Christmas.  Aaron’s parents Dick and Rosemary could not come out for the ski weekend at Timberline they had planned with us for months.  And while my parents braved a harrowing drive to get to Canaan (my father had some strong comments about the quality of road plowing in various stretches of Virginia and West Virginia), the snow delayed their departure an additional day, stretching the limits of Nelson family harmonious co-habitation. 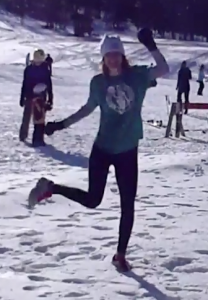 Most people are familiar with my wimpy princessy tendencies that preclude participation in events like Hellgate.  But when it comes to treacherous footing, I’m surprisingly game.  After getting our fill of snowshoeing, Aaron and I dropped the clunky footwear to take on the snow drifts with nothing but Nike, making it through the rocky Dolly Sodds with surprisingly good success (if you measure success by not falling on our butts rather than by miles covered). 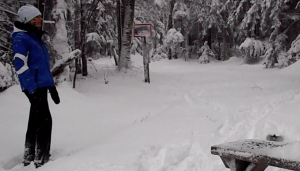 our best winter bud, the chickadee, swoops in for a snack

Winter is so quiet when all the animals are gone.  Even the over-populated Canada goose population had long abandoned the nearby Spruce Island (‘Goose Poop’) Lake.   So when it’s cold and remote and you haven’t seen another person or even a squirrel for hours, the Eastern black-capped chickadee becomes a dearest of friends.  We spotted a few deer, a hawk, and some creepy flocks of giant wild turkeys during our adventures in the snow.  But the hardy little chickadee was the only consistent presence in those white woods, with its distinctive chick-a-dee-dee-dee call accompanying our travels throughout the day.  The xc ski area Whitegrass puts some birdseed out on benches that the daring chickadees dive in for even in our presence.  When new snowfall buried the seeds, I reached into my pocket for some peanut-butter crackers that our little friends deemed a very viable substitute. 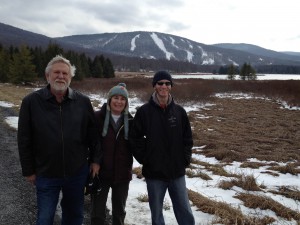 Aaron and the Nelsons

D-day came on December 24th, with the storming of the Nelsons upon the gates of the Chophouse, along with the materials for the Christmas Eve Scandinavian smorgasbord, including Swedish meatballs, herring, pickled beets, and lingonberry sauce.  My father’s parents are from Finland and Sweden, so I grew up with Christmases that were steeped in Scandinavian traditions to a level verging on absurd.  For Christmas Eve we always produced an elaborate Scandinavian smorgasbord that included a number of foods I wouldn’t touch (like ‘veal jelly’, potato sausage, and pickled herring) and some foods I would nibble at (the meatballs and deviled eggs), while I mainly loaded up on a jello dish made by my grandma’s cousin Maiju.  If it weren’t for the rich rice pudding dessert we ate at the end, my caloric intake for Christmas Eve would have dipped below 250.  After dinner we would dance around the Christmas tree singing Finnish Christmas songs.  No one below the age of 60 knew any Finnish, but we knew all the songs by heart (or at least our Anglo-mangled versions of them) and when we were supposed to make bunny ears and tails with our fingers.  I clearly recall the semi-tormented facial expression and halfhearted staggering of my older teenage brother when made to take part in the Finnish bunny-dance songs.  Fortunately, Fred did not have to partake with me in the Santa Lucia pageant, in which I got dressed up in a white gown with tinsel wrapped around my head and waist and with a group of Scandinavian children performed traditional Swedish Christmas songs, including the Santa Lucia girl who wore a terrifying headdress of candles on her head.  I actually enjoyed the whole Santa Lucia thing, but I was always at a distinct disadvantage because I was the only child who did not actually speak Swedish.  I could stagger through a chorus or two of ‘Stilla Natt (Silent Night)’, but for the rest of the songs I had to scrawl their lyrics on the circular disk that kept the candle’s hot wax from dripping on my hand (except for the one Santa Lucia girl, the other girls just held single candles; the boys, who apparently couldn’t be trusted with flaming objects, were given wands shaped like stars to hold — and hit each other with).  I was able to read the lyrics off my candle holder for about half of the show (some of the other girls would lean over to read off my disk as well), but eventually the wax would drip and obscure my writing and we’d all have to count on the lone Santa Lucia to carry the show. 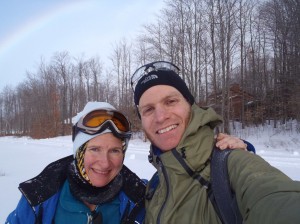 Christmas night it snowed even more, and my parents were unable to leave as planned the next day.  My father stayed home writing (apparently proving the existence of God, although not a Judeo-Christian we were told), but we, undeterred by the snowstorm, ventured off to Whitegrass for a long day of more adventure.  It even started to clear up at the end of the day, with a long rainbow stretching across the homestretch.