(Near) Death of a WUSsie Chophouse Ho 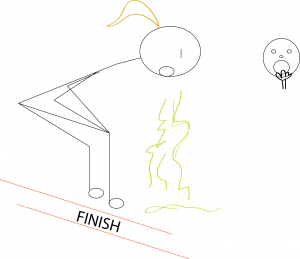 The Willis River Trail Race (formerly known as the Swinging Bridge 50k) was supposed to be a nice little confidence booster leading up to my much-anticipated crusade to redeem myself this year at Holiday Lake, after losing the lead last year in a fit of vomiting at the last aid station in what I consider the most demoralizing race finish of my life — even worse than the time I collapsed on Boylston Street in the last stretch of the Boston Marathon in 2009 (where I was able to get up and stagger across in 2:55 for 42nd place female).

Although I was able to cling on the win in the 35k at Willis River, and felt fluid and strong for most of it, the Barfies returned with a vengeance, representing a marked set-back in my long-running quest to become an ultra-runner (pun intended).  Overall it a great warm day and a fun winding course through Bear Lake Park, situated about an hour west of Richmond.  As Sean had warned me, everyone continually went off-trail and half the challenge was just staying on the darn course.  Just as I started to put a good gap on second place I would go off-course and end up behind her again — it happened at least three times.

But after 17-18 or so miles of pure cruising at Willis River, feeling completely in control of the race despite the off-course detours, it all started again.  It begins innocuously enough, with a soft gag on whatever I’m trying to eat.  A mile or so later it develops into a dry heave, where my stomach contracts hard and I just vomit a little into my mouth.  The next time I heave it all spills out of my mouth (I’d like to be able to claim it was a pretty projectile vomit like the one in the picture here, but really most of it just dribbled down my face, chest, and onto my knees). 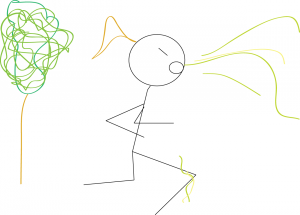 Mastering the art of puking without breaking stride

The only difference between here and Holiday Lake was that there was a 35k option, so I knew that if I just toughed it out a couple more miles I could stop running and forget the last 10 miles of the 50k.  With a fiery determination to finish without giving up the lead I dug in and run through the dry heaves and at least 3 full-fledged vomits.

The trail went on interminably, twisting and winding, and at one point I seriously considered just curling up in a little ball on the side of the trail and taking a little break from the great unpleasantness for a while.  But I knew that Holly Bugin (winner of the UROC 50k, 4th at MMTR) was still on my heels (in part because I kept getting lost) and it wasn’t long to the finish.

As I approached the finish I started to vomit again, but slowed my pace down to hold it in.  But when I crossed the line I just let it all out in front of an audience of spectators and other finishers.  Some of their reactions were classic.  Our friend from Canaan, Luke, was there, and he gave me some water after I crumpled into a pile of wet leaves.  Aaron trotted in a little later and happy to screw the 50k, call it a day at 35k and go home.  I got some warm stuff on and was able to chat with some of the folks at the finish — Sophie and Mike Bailey (who’d twisted his ankle and dropped) and Caroline Williams (who’d gotten so lost she had to drop too), as well as Matt and Holly Bugin, whom I’d run part of the race with.  But ultimately I had to get my sick self home.

Where do I go from here?  I have deep reservations about revisiting what was such an awful experience last year at Holiday Lake, especially when I clearly have made no progress on fixing my stomach.  I’m really dejected because I love to trail race, and I’d love to move up into longer distances, even try a 50-miler.  I’ve got the half marathon trail run distance down pat, with a 4-for-4 undefeated win streak for half marathon trail races (3x WHM + 1 Dam Half), and I feel like there’s a lot potential in my legs to go the distance.  But I’m not going to slog through misery each time I run long.

I might try some different nutrition products.  I was recommended Hammer gels and Generation UCAN.  At first I thought Aaron’s suggestion that I skip the 50k and just jump to 50mi sounded crazy.  But maybe a longer, less intense cruise would be easier on the gut?   Heck, at this point I’m willing to try anything.