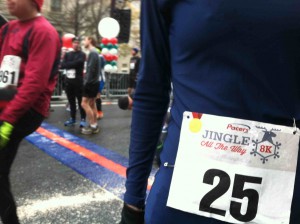 Jingle All the Way 8k is fast becoming a Fogarty tradition 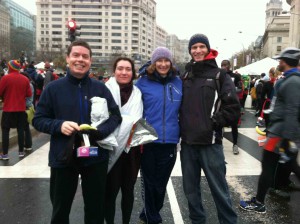 For the second year, Cecile, Bernard, and I braved the dire wintry weather forecasts to run the Jingle All the Way 8k that starts and finishes at Freedom Plaza.  Aaron took one look at the course map (which includes FOUR 180-turns around cones, including one brutal one in the last quarter mile), and opted to just be race crew.  I’ll admit that those turns suck, but the JAW run is growing on me as the Martha Version of Hellgate — wintry weather, a bone-crunching kind of pain (I ran 5:48-mile pace), but good spirits and Christmas cheer (over 6,000 people ran, donning a wide assortment of Christmas-themed costumes, weather be damned). 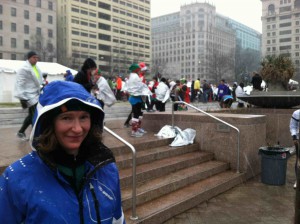 I wore my trail shoes because of the plantar fibroma that is still bothering me and limiting my trail running (god those things were slippery around the cone turns!).  I wasn’t sure what to expect speed-wise.  I’m still kind of a mess physically, between my chronically sore right hamstring and new foot fibroma problems.  But within the first mile of the race I found myself running neck-and-neck with another female runner, a situation that I don’t find myself in much now that I’ve moved up to longer distance races. 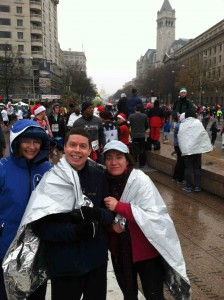 I wasn’t so interested in getting into a dogfight, but neither of us could lose the other.  We passed the 4th place woman around mile 4 but were still neck-and-neck going into the last half-mile.  I was beginning to think that it would come down to the last sprint to the finish.  But I got a jump on her going around the last cone, and finished 4 seconds ahead, going under 29 minutes for my first time at the 8k distance.

I’ve been deflated about my foot and missing Masochist for the last month, so it was nice to know there’s still some wheels down there and have a good final race before I wind down for the winter.

Here are some official race pics:

There were many super-photogenic runners that day. 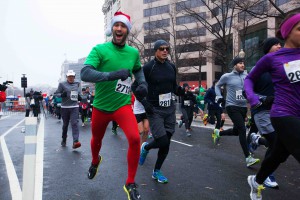 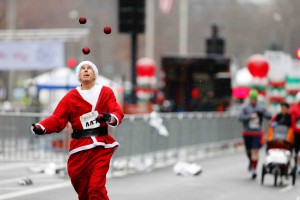 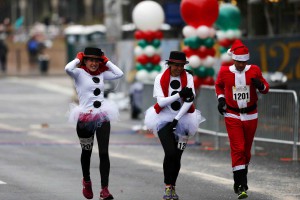 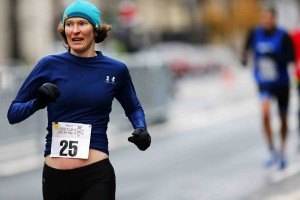 I’m afraid I was not one of them. [Notice the drool down the left side of my mouth.]