Farmers Only A Toast

The Vehicle of Death 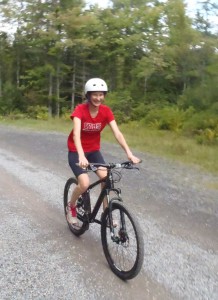 This is a remarkable photograph, for anyone who knows me knows I don’t ride bikes.  But while the rest of you are out there vanquishing Frenchie mountains, as well as those local slopes at the Ring, I’ve been conquering, well, my ass.  And my shoulders.  And neck.  And long-standing absolute conviction that bicycles are vehicles of death.

It was my freshman year of college where my childhood friendship with the bicycle really went sour.  Standford University’s sprawling campus made a bike a necessity.  I had one friend who refused to bike, and I think she was late to every class she took.  You could differentiate a Stanford undergrad from a grad student by whether they wore a bike helmet, with the grad students falling universally into the head protection category.  With 5-10 thousand teenagers and young 20-somethings speeding across campus quads along self-defined pathways, a bike crash was witnessed on nearly a daily basis.  But the kicker for me was the rainy season.  As a prospective student I had visited Stanford in the delightful balmy spring.  No one had informed me that Stanford’s paradise would descend into an abysmal bleak unabating rain storm from December to April.  Seriously, not a sunny day during those months.  The worst part was not biking in the rain, or the spike in wet-induced bike accidents, but the sitting through all your classes with a soaking wet ass.  How in hell was I supposed to absorb multivariable calculus when my ass had just absorbed Lake Stanford?

When I transferred from Stanford to Amherst College after my freshman year, the reasons were primarily related to academics and athletics.  I could devote a pretty hefty blog to why I left Stanford for Amherst, it was a pretty dramatic decision that most people around me heavily questioned at the time (many of the Californians at Stanford thought that I was returning home to attend a community college — I swear half the Stanford students did not know that Massachusetts and Maryland were not neighboring states).  But I nothing made me happier than trading in the sprawling Stanford campus where Japanese tourists were shuttled around in long trains of tourist-mobiles snapping shots of students like they were exotic zoo animals (if you google ‘golf cart tour’, Stanford is the 3rd place that comes up, after Rome and Catalina Island) for the quaint, New Englandy, entirely stroll-able Amherst campus.  The bike didn’t have anything to do with why I left Stanford, except for symbolizing my sense of being completely lost amid the dizzying flurry of Stanford bicycles ridden by kids who seemed to know where they were going and getting there in a hurry.  I knew a fellow freshman who was taking double course loads, working for a start-up (this was 1999, the height of the tech bubble), and sleeping 3-4 hours a night.  My parents were kind of miffed that I’d left my bike with a friend in Palo Alto, but the bike could have no part in the second incarnation of a more zen collegiate Martha.

I wouldn’t ride a bike again until Thailand.  After graduating from Amherst and working in San Francisco a bit, my friend Sarah Wright (yes, the horse barn Sarah from Milwaukee I just visited) and I decided to muck around the world, starting in Southeast Asia.  Again, a much longer blog is required for Martha & Sarah’s adventures in the Far East, but one day Sarah convinced me, despite my deep reservations, to rent bikes for a day so we could explore some of the more remote parts of whichever city we were in — maybe it wasn’t even Thailand, maybe it was Laos or Vietnam or Cambodia, I really can’t recall.  All I can recall is that my bike ride HURT.  Hurt places that had not been hurt since the first time I tried as a 14-year old to ram a tampon in.  I suppose the $3 bikes we rented in Thailand were not exactly of the highest quality.  From then on I equated biking with some kind of torture.

When I moved to Penn State to start my PhD in biology, I discovered that biking was not only ergonomically challenging, but also of a different culture.  Maybe some of you are aware that State College, PA is one of the country’s foci of road and mountain biking.  I swear State College has the highest number of bike shops per capita.  And a new store pops up every time there is drama in the biking community (and there is A LOT of drama in the biking community), as one of the business partners splinters off.  Since I was an energetic endurance athlete entering a small town, it was quite assumed that I too would join in the biking party.  But the bikers were worlds different from running community.  I thought collegiate runners were obsessive, but bikers brought it to a whole new level, with tightly stratified levels of competition and membership in sponsored teams, resulting in an intense, cliquish, chauvinistic, commercialized clash of egos jockeying to redefine to the pecking order.  But there was humble respect for the marathon runner’s suffering.  Even among the most hardcore bikers (State College played host to the World Championships for the Single-Speed Mountain Biking), they had to admit that even in the gnarliest of rides they didn’t quite taste that kind of intensity of suffering as the last miles of the marathon.  And as a female runner who could run a marathon faster than Lance Armstrong, I got a measure of respect that was rarely afforded.  But I pretty much steered clear of the biking world during my three years living in State College.  Not only did biking strike me as the Wall Street of endurance athletics (ie, a completely commercialized arena for a certain breed of male to engage in proxy battles of the ego), but the number of injuries and deaths by bike in the area were haunting.  Within my first weeks, a fellow grad student admitted that he had gotten the down payment for his house from the settlement he received from a horrific bike crash with a car.  I was absolutely convinced my friend was on a death mission when he would ride his bike on the roads in the dark through the ice and sleet and snow.  I left for DC as probably the only endurance athlete in town who had having never ridden what I had come to term ‘the vehicle of death’.

I was thrown for a loop when I saw that Aaron’s license plate read ‘TRI GEEK’.  Aaron had never struck me as the biking/triathlete type.  But Aaron shrewdly played down the extent of his past life as a biker/triathlete during the first months of our becoming acquainted.  He let it drip out slowly: the bib shorts, the double ironmen, the accidents and injuries.  I had vowed long ago that I would never in a million years date a biker, but quickly realized that Aaron deserved a pass.  In fact, as evidenced by the photograph above, Aaron has quickly softened my opposition to biking.  This was my first time mountain biking.  My ass is sore, the ascents were thigh-busting, and the steep rocky descents terrifying.  But it was pretty darn fun.