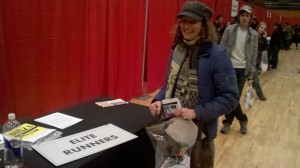 Saturday, March 26, 2011 was supposed to be a whopping big day for Team WUS, highlighted by the highly anticipated Brian v. Sean showdown at Terrapin Mountain.  Instead, Sean sat around Leesburg reading sci-fi novels and watching March Madness, while Brian went for a makeover, rediscovering his chin beneath that burly beard.  So I’m afraid all you get is my measly 13.1 miles at the National Half Marathon.  But Greg Luna and I sure packed a surprising amount of adventure into that short little race.

Gregory Luna Golya is 40-something anthropology grad student at Penn State, married with lots of pets but no kids, who still parties seamlessly with kids a decade or more younger.  In that way Greg is kind of like Tom Cali, except that with Tom you are always aware that he is older because he is wearing expensive clothing no grad student could afford and driving some fancy car.  Greg never jokes about his age because I don’t think he even knows he’s not 25 anymore. Greg has bad knees, rides his bike a lot, but never really trains for races.  Instead, he pops ample doses of Celebrex and somehow bites the bullet and makes it through Boston every year.  It’s easy not to realize how cool Greg is because he is so understated.  For instance, I was listening to his account of the time he was airlifted after a terrible accident in a bike race that shredded off part of his ear and left him in a pool of blood with a concussion, only to realize that this horrific event occurred while I was still in State College – I vaguely recall hearing about it, but it was totally underplayed.  Hell, the bloody nose I got on Bear Mountain got way more play in the Nittany Valley Running Club than Luna’s catastrophe airlift. 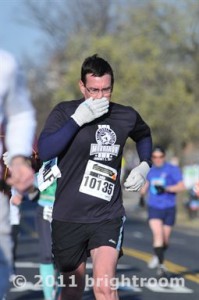 Luna’s arrival Friday night was a complete godsend.  It’s always hard for me to come down from Italy, where life is so rich and fabulous and full of beautiful places, fantastic food, friends, and cocktails.  But this time was particularly hard.  WUS is in tatters – no one even showed up to run on Tuesday night.  Sean, Brian, and Brittany are all injured in various ways.  Cori (my work friend) is off with her new boyfriend obsession.  At least Sean ponied up and ran a little with me on Wednesday — Brian wouldn’t even join us Wednesday night for dinner because he’s wailing about putting on pounds.  Made me want to slam his pretty little head against a wall.

But with 10 minutes to go until gun time, Greg and I were still lost in Anacostia.  I won’t go into details, but it really wasn’t our fault – I blame the metro not opening early enough, the faulty instructions from the parking attendant, the closed bridge back into the city, and a GPS that kept wanting us to go over that said closed bridge.  But I did manage to make it to the starting line in time, and even to find my WUS friends Keith, Nancy, and Sean in the pack.  Unfortunately, I did not have time to pee before hand.  I had to go like a racehorse, so I scooted off to the closest bush.  Maybe if I hadn’t been rushing so much I could have managed to pee without exposing myself or wetting myself, but in my haste I erred on the side of the latter.  There is a horrifying moment when you realize that although you can feel that you are peeing, you cannot see any of the pee shooting out anywhere.  Then you feel the warm dampness against your leg and realize what terror has befallen you.  But the gun was going to go off at any minute, so I wrung out as much of the pee out of my shorts as I could and then scampered back to the WUSsies.  No one mentioned anything about the big wet mark on my butt – I still do not know if anyone noticed, although it is hard to imagine that they did not.

Keith Knipling is the de facto President of WUS, sending out emails, designing our WUS shirts, and one of the few Tuesday night regulars (also see the glossary of the Uwharrie 2011 race report).  Nancy has technically WUSed with us, coming to a Tuesday night WUS run.  But by the end her legs were dripping in blood due to a series of mishaps, the most memorable of which involved tripping over a low-hanging chain at the end of the Glover Park trail.  We resign ourselves to the fact that Nancy probably never return to WUS, although we were thrilled to see her come to the Knipling’s famous Eagle Run in January (which is held during broad daylight and suffers few casualties). 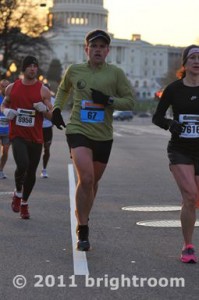 Sean here is not the Sean Andrish you may recall from Uwharrie (Sean A.), but rather Sean Burns (Sean B).  Sean B. is fast like Sean A., but you need to knock off about 20 years and add a lot of tattoos. 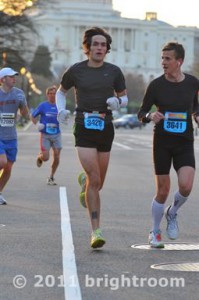 Sean B - how does he already have a farmer's tan in March?

The nice thing about road races is that if you can actually get yourself to the damn starting line, the rest is pretty much smooth sailing, which is clearly not the case with trail races (see my Catawba race report).  At first I agreed with Keith that it would be a nice idea to run with Sean B., chat about pissing myself in the bushes and such, but I had it hanging over me that I was supposed to be an ‘elite’, so we split after a mile or so. 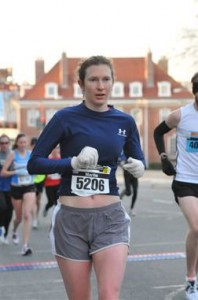 Shorts look good from the front! (Why are all my race photos belly shots?)

My legs were still fatigued from Catawba and my left butt was still somewhat problematic, particularly up the hills, but in general I was pleased that even though I could feel that my legs were laboring like poorly lubricated gears, they still managed a pretty good clip, finishing as the 6th woman in around 1:22, justifying my free entry as an ‘elite’ (see the very embarrassing picture below that Luna snapped of me getting my bib at the elite entry table).  I am going to have to seriously rest up these next two weeks if I’m going to feel good at the Charlottesville Marathon.

The finish area after the race was awesome: Greg and I enjoyed 9am beers in the beer garden  where we watched Michael Wardian cruise in to the victory and snagged entire trays of Greek yogurts and boxes of granola bars that were being given away.  Maybe those beers weren’t such a good idea – or maybe my pre-race menu of Indian Buffet for lunch and Vietnamese for dinner wasn’t such a stellar choice either, because somewhere on Florida Avenue on the way home I asked Luna to pull over.

‘Min, that Burger King is pretty sketchy.  Looks like you could buy crack at the door.  Maybe we shouldn’t stop here.’

‘Luna,’ I replied exasperatedly, ‘I already pissed my pants today, I’d really rather not crap in them.’

Needless to say, I made it past the BK Broiler bouncers at the door, relieved my intestines of the offending contents, and even rallied for brunch at the famed Parkway Deli, where I’ve been going since a child for the classic Jewish fare of oversized sandwiches with salty meats and of course the pickle bar.  Afterwards, Greg went back to State College to judge an anthropology grad student poster competition, but I made him first drop me off at my favorite thrift store in Bethesda so I could go shopping (I found a perfect BCBG Max Axria skirt – still with the $80 price tag on it).  I returned home to Macomb Street only to find my first four-leaf clover of Spring 2011 in DC, entirely restoring my sense that everything is this crazy little life will work out okay in the end.