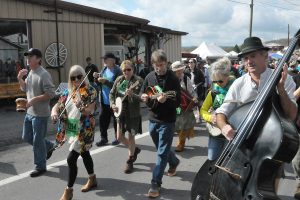 Luke rigs it so he can play and 5k 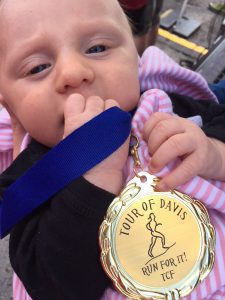 When I knew I was having a baby in July, I decided that my first run back would be the Run For It 5k in Davis, WV. Because RFI must be the only race where the number of runners actually exceeds the population of the town (Davis has around 600 residents). Every last weekend of September, the sleepy town of Davis gets packed to the gills and has the party of the year. It’s one of the toughest, hilliest little 5ks around. No one is running it for a PR. And no one is running for prize money.

Because all the prize money goes to local charities. Instead of winning for yourself, runners compete to earn money for the Tucker County charity they’ve selected to run for (there’s a list of about 20). The overall male and female race winners earn $1,500 for their selected charity, 2nd place gets $750, 3rd gets $500, and age group winners 1-2-3 also win money for their charity of choice. 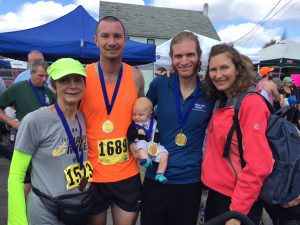 Team Bjorn won over $2000 for Heart of the Highlands 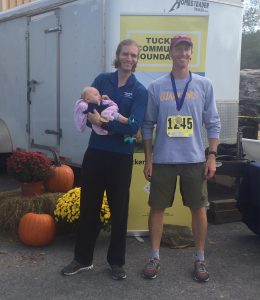 Aaron earned $250 for the Heart of the Highlands by winning the 40-49 age group.

Aaron and I run for Dan Lehmann’s Heart of the Highlands organization that maintains and builds new running and mountain biking trails around Davis. Dan is the RD of the Highland Sky trail race, and we’re thrilled to be able to run the race to support Dan’s hard work.

With a two-month old kid, Aaron and I are not anywhere close to racing form. Before the race we joked about doing some strides, as if the wear and tear of catering to a newborn infant’s 24/7 needs for nine weeks had left us with any energy for such things. I thought that being a tough little ultra runner would prepare me for the physical and emotional challenge of being a new parent. Not even close. My boobs are still totally dumbfounded by their new line of work. 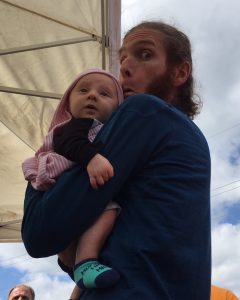 Bjorn as the Next Messiah

Left Boob: Hey, Right Boob, what the hell is going on here?

Right Boob: No idea, but it f’in hurts!!

Left Boob: Are you also all lumpy and swollen and having your nipple chewed off every couple hours?

Right Boob: Yes! You too?

Left Boob: Dude, I thought we were supposed to be decorative.

Right Boob: Like floppin’ around in bikinis and getting stroked from time to time. Like a house cat.

Left Boob: Dude, I have not been training for this! My milk flow is all over the place. My soft nipple isn’t nearly calloused enough for hard baby gums.

Right Boob: So, realistically how long do we have to do this for?

Left Boob: Someone said something about 12 months.

Right Boob: TWELVE MONTHS!%$(! No f’in way. That’s insane. And btw what the frick is that pump thing?

Left Boob: Don’t worry I have a plan. It’s called Operation PubMed. I’m finding literature about the negligible benefits of breast milk over formula. Sure, the baby will be a little more gassy. But she is a twenty-first century woman and we are twenty-first century boobs. We’re just supposed to sit by the pool drinking piña coladas looking pretty. 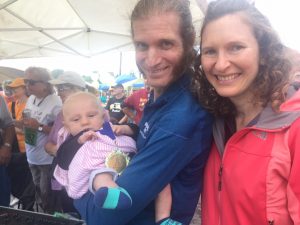 Right Boob: I thought babies given formula end up obese with lower IQs.

Left Boob: Hogwash. Aaron was a formula-only baby. And he’s smart as SHIT.

Right Boob: And definitely not obese. But that’s just an n of 1.

Left Boob: Look, I am not against breastfeeding. If a woman wants to breastfeed, our society should do everything in its power to help her, including making comfortable places at work to pump and letting women feed freely in public spaces. My point is just that it’s not the most important determinant of whether you’re a good mom. That JAMA article was disturbing as f*&K!

Right Boob: I haven’t read it.

Left Boob: Go read it. And then think about all the ridiculous lengths some women go to in order to get their babies breast milk. At the expense of their sanity, their work, their relationships with their spouse and family. All because they think it’s required to be a good mom. 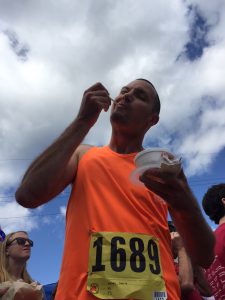 Dave does his best impression of a person enjoying cole slaw 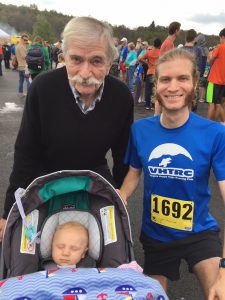 So with me and my boobs a little ground down these days, we brought in a couple of ringers. Dave Moore, my friend from Penn State who now coaches track/xc at Penn State Harrisburg, locked up 3rd overall male. Aaron’s mom crushed the 70-79 age group. And Aaron and I did better than we’d thought. Aaron won the 40-49 age group (7th overall). And I took the lead in the last 300m to win the women’s race.

The race was an indicator of just how far I’ve come since returning from the hospital with Bjorn. I was diagnosed with postpartum depression three times during the two months after giving birth. Having the wettest DC August and September on record was little help. I’m doing a lot better now, in no small part to getting over the Cult of Breastfeeding and introducing some infant formula into Bjorn’s diet, which has made for a fatter, happier baby and a less sore and miserable mom. It’s taken two months for me to finally start to feel like myself again. Here were some of the milestones since Bjorn’s birth that helped me feel like a marmot again: 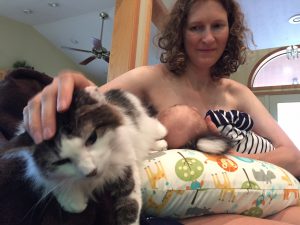 Cat and baby enjoy the nursing pillow together

2 weeks: played with my cat Leda (I can’t believe it took me 2 wks to remember that kitties should be played with every day)

8 weeks: went to a two-day conference on universal flu vaccines plus work drinks/dinner (got totally engorged at the work dinner because I went too long without pumping or feeding, but worth it to think about something other than baby for a little bit)

9 weeks: ran a race (it wasn’t pretty: the clearest sign that I had just given birth two months ago was that I was leaking urine the whole way, and piss started gushing down my leg during the final quarter mile when Katie Wolpert and I were fighting for the win. I’m still having some pelvic pain, and the hill around mile 2 is so steep it’s like a wall. but damn did it feel good to race again!) 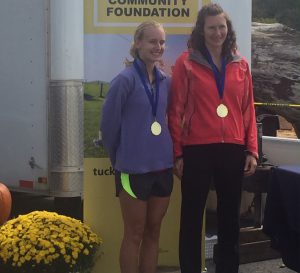 After two months of painful breastfeeding, it was nice to do something that comes to my body so naturally.

The Chophouse has always been Aaron’s home, and I’ve always just been along for the ride. Sure, I’ve organized SnowShoeFests and gotten some of our DC friends out there. But one of the best parts of RFI is feeling like part of the Davis community. Aaron isn’t such a go-out-of-his-way-to-be-social bear, but I’ve started to work on finding a community of people in Davis to hang out with when we visit. We’ve been meeting up with our trail running friends Jeff and Charlotte for dinner or a hike. I told Adam after the race that he and his family should join us next time we go hiking in the Sodds. And some day we’ll overlap with Tracey and Frank. There’s a great running community out there, and Aaron and I just need to work a little harder to link up with it.

[Whorfianism is the theory that language shapes thought. While there are terms for the major hormonal and morphological changes that occur during a woman’s teenage years (adolescence) and post-child-rearing years (menopause), there is no term for the similar major physiological and even neurological changes that occur in a woman after giving birth. Consequently, in contrast to adolescence and menopause, there is little research and little public sympathy or understanding of what a woman is experiencing and her behavior during this critical time period. After being fussed over for our 9 months of pregnancy, we’re kind of just left out to dry — or rather, quite the opposite, as urine runs down our legs. #justsayin]

One Response to Run Fo’ It!