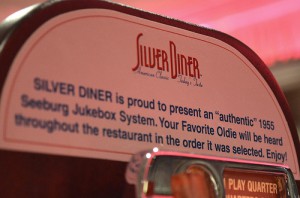 It was past 1am and Aaron and I were downing breakfasts with a chunky monkey shake at the Silver Diner in Reston, VA.  I was kind of loopy because I had passed out hard in the Jeep on the way there (for the second time that day — the Jeep’s suspension always seems to lull me to sleep).  We can always hear the conversations of the people in the adjacent booths very clearly there, so we entirely understood why our waitress had this exasperated look of someone who is about the throw a plate of runny eggs at someone (why diners there seem to do everything in their power to get their entrees infused with waitress saliva I’ll never quite grasp).  Anyway, the most significant moment of the Silver Diner post-midnight breakfast was not the bastard in the other booth moaning about his undercooked turkey bacon or even the pile of chocolate chips awaiting at the bottom of the shake, but the sign explaining the “authentic” (in quotes) 1955 Seeburg Jukebox System.  At once the perplexing oxymoron crystallized why the Neil Young concert we had just come from had been worth every penny we had blown on it, including the ridiculous Ticketmaster fees.

The only thing disappointing about Neil Young and Crazy Horse’s Patriot Center performance was the fans.  Maybe it was the section we were in (the diehards were probably standing on the ground floor).  Maybe it’s that even though appropriately named Neil Young doesn’t seem to have aged (I’m referring to his exuberant energy, not his shriveled face that looks like Chucky when it grimaces real hard), his fan base certainly has.  And while Mr Young continues to grow his music, many of fans are still stuck in the 60s and 70s.  Although Young chimed in with enough old classics to placate the fans who came the see CSNY (‘The Needle and the Damage Done’, ‘Cinnamon Girl’, ‘My, my, hey, hey (out of the black)’, ‘Mr Soul’), many completely tuned out (or tuned into the beer or bathroom line) when he turned to the material from his recently released ‘Psychedelic Pill’ album.  NY & CH ain’t no CSNY.  I’ll admit, the prolonged feedback at the end of the 25-minute ‘Walk Like a Giant’ (which was otherwise fantastic) was a little rough on the ears.  And it was kind of hard for the audience to get into the show when Neil never seemed to be able to actually finish a song, making it hard to release a hearty applause.  (I told Aaron I considered this a metaphor for his possessed refusal to let the music (and his career) come to a close, but more likely it was just that he was getting a little carried away — and knows that as Neil Young he can pretty much get away with anything.)  I also found the random lady wandering the stage with a guitar case during ‘A Girl with No Song’ somewhat baffling.

But aside from these minor perturbations, the concert was brilliant.  One song he’s thumping his electric guitar ‘Blackie’ with enough incendiary heat to exorcize his 68 years worth of demons.  The next moment he’s plaintively stroking his acoustic guitar, as if transporting the audience to a Montana campfire drinking whiskey and watching stars.  The trance couldn’t even be broken by the lady sitting next to me who couldn’t seem to unglue her nose from her phone’s data plan or all the people who kept getting up in the middle of the song.  But it was heartening when the fresh aroma of pot wafted by during a transcendent version of ‘Cortez the Killer’ — at least someone else in my otherwise loser section 110 was digging it (although to enjoy this particulary song I have to consciously block out the lyrics and his absurdly overly rosy depiction of the pre-Spanish arrival Aztecs as folks of peace and love — really, Neil??).

The brilliance of the Neil Young performance is that you combine fresh creativity (even at 68 he’s still churning out fantastic new albums that take full advantage of his loose creative license) with the wizened comfort of someone who has earned the right not to give a fuck.  Normally, I’d write f&%k or something, but he dropped so many f-bombs during the show (one song consisted of a good five minutes of him repeatedly uttering the phrase with increasing thrill, ‘He’s a fuck up!’) that it’s more appropriate in this case to just write the damn word.  Neil Young kind of reminds me of what Tom Corris would be like if he had musical talent.  Except that one of the greatest features of Young is that he strikes you as the kind of guy who’s never picked up a lady in a bar, ever.  Even after becoming one of the most famous singers.  Aaron pointed out that Neil Young looked exactly like the kind of guy you would instruct your kids not to talk to if he lived down the street.  In a floppy flannel and worn jeans that were most likely whatever was on the top of the pile, Young shreds all pretension.  One of the best moments of the night was when he was musing to himself about which classic he should play to appease the crowds and about how he could time capsule back to an older era; imagining that the crowd was not convinced of his ability to time warp he spat out ‘Fuckin’ doubters!’  And for that one ‘Cinnamon Girl’ he did, the biggest crowd-pleaser of the night.  Unfortunately, most of the fans in the Patriot Center that night were looking to replay their nostalgic 1960’s past.  And for that purpose they could have much better spent their quarters at the Silver Diner’s “authentic” juke box.  Neil Young has powered into the present, with an authenticity and easy fierceness that at least Aaron, myself, and the dude lighting up in the back of section 110 were there to revel in.

(‘Neil Young at Patriot Center: Still a Heart of Gold’ concert review by the Washington Post: I always refrain from trying to write about things like music because I’m god awful at trying to describe musical qualities in type, so here’s the Post guy’s take — some a nice picture and some hilarious comments, particularly the lady who opposes Neil Young’s apparent fondness for cats.)

2 Responses to Neil Young versus the Silver Diner juke box