It was 2am, a week and 4 hours before Highland Sky, and Aaron was still half-asleep.  ‘Maybe it will pass,’ he offered.

I’ll spare further details, but the next 48 hours my bathroom was a pyrotechnics of gastric fluids.  The different colored Gatorade and Pedialite tinged my gastric fluids with a remarkable array of fluorescent pigments.  I’ve had Southeast Asian stomach ails, I’ve had African stomach ails, and nothing has approached the intensity of that Macomb St stomach bug.  I’m not sure what bug was in my belly (I suspect it was from a burger I ate at a restaurant Thursday night that was undercooked), but my body was so determined to expel it using all orifices, including through my nose, and with such force, that my back ached for days.  The first time I tried to drink something, I took a couple sips of ginger ale, was so proud of myself, and then blurted out Aaron, I think I need a bucket……before heaving all over the hardwood floor on my way to the bathroom.

‘I’m not making any pancakes,’ Aaron explained, ‘until you prove first that you can eat some jello.’

Fair enough.  If I lay perfectly horizontally I could eat, because as soon as I tried to lift my head I got queasy.  So Aaron had to spoon feed me like a baby bird.  I got down a couple spoonfuls of red jello with effort.

‘So, like, exactly how much jello do I have to eat before I get my pancakes?’

Aaron laughed, and whipped up some big pancakes, which I devoured (well, 1.5 pancakes, but that was more than I’d eaten in days).  The pancakes were a turning point in my recovery, and soon I was getting down crackers and bits of cheese and later some applesauce.  When I was finally rehydrated and peeing normally, I weighed myself: 111 pounds.  I’ve been struggling keeping my weight up all spring.  I like to be at least 120, but I’ve had all kinds of abdominal issues all spring that have kept me in and out of doctors’ offices, and I’d slumped down to 116-ish.  I looked too skinny in my Delaware Marathon photos a couple weeks ago.  Ironically, the fatty hamburger and fries I had eaten at Burger 21 was as part of Operation Fatty Marmot was the likely culprit of whatever bug had emptied my insides.

Our fridge was spilling over with food, because one moment I would be able to eat a certain food, and then for the next days I wouldn’t touch it.  After my great initial pancake breakthrough, I think it’ll be another couple of weeks before I can eat a pancake again.  Fortunately, there is an amazing pizza place just down the street from us (Vace) and I was living off of their slices.  By Tuesday my cat could sleep on my belly without me writhing in pain, by Wednesday I was walking, and by Thursday I was back at work.  My poops remained extremely pale, which Google told me was the result of having barfed out so much of my bile.  I remained extremely tired, and opted out of the Thursday morning swim.  But when Thursday evening rolled around, I tossed my running stuff into the Jeep.  My creed has always been that if I can walk, I can run.

Well, dagger legs are better than barfing, I suppose.   I was fifteen miles into Highland Sky.  I had decided to run non-competitively, slowly, and see how far I could get, on the basis that my appetite had been restored, at least in part (I couldn’t yet do Sheetz, but I could do pizza).  But I had underestimated how tight my legs had gotten during those days of lying on the couch, and how weak they had become during their inactivity and malnourishment.

Even still, I had enjoyed myself for the first half of the race, running with some kind folks who chatted with me.  Highland Sky is one of my favorite races, on my home turf in Canaan, and it was nice to just be out there.  Rick Gray gamely tolerated my company during my favorite stretch of the race between AS #2 at the end of big first climb and AS #4 at the start of the dreaded road section.  Running with Rick made that section particularly delightful, as Rick was exactly the kind of guy I like to run with — someone who exudes a comfortable knowledge of what he’s doing out there.  But the ensuing Road Across the Sky was not kind on my IT bands, and by the time I got to the Sodds I was very uncomfortable running down hill.

Hey, you should stop running.  You’re too skinny!   There was a group of about twenty riders on horses in the Sodds, and one of the guys thought he was very funny.  ‘I’ll tell you why I’m skin and bones!‘ I wanted to retort.  ‘Because I puked out five pounds along with my Shigella or maybe E. coli or maybe Salmonella.  I *know* I shouldn’t be out here on these wobbly little stick legs.  So maybe YOU should get your fat ass down here and run, and I can ride that pretty horse of yours back to Canaan.‘  But I was way too tired for any sass.  I just stared ahead and willed my wobbly legs up the hill to AS#7.

At AS#7, I made myself at home on a rock and sat eating watermelon and swigging ginger ales, taking in the beautiful view up there.  I was hurting and hadn’t much desire to gut out the rest of the course.  But I had dropped at this very aid station back in 2011, and I knew I couldn’t drop there again.  Furthermore, I was still holding 5th place for Last Shwag.  And, god, all I could think about was how Aaron had sufferfested through the race last year with his Lyme disease, and how lame it would be to drop.  So I ushered myself off the rock and limped along.

The rest of my race was my own version of Sufferfest.  Getting down the ‘butt slide’ was so painful on my IT I almost hyperventilated.  Several other runners showed deep concern, but I assured everyone I was going to make it to the finish.  On the last stretch of road my IT screamed even to walk, and it occurred to me that I might not get to choose whether I finished or not.  My thoughts flickered back to Brian Greeley and how two years ago he’d made me look back like 50 times on that road to make sure no 6th man was coming so he could hold onto his 5th place Last Shwag.  I hurt so bad, I didn’t even care if I got passed at this point.  I just did my sad walk.  But shortly after passing the ‘1-mile left to go’ sign I noticed another woman approaching behind me.

No, no f-in way.  I am not getting passed in the last mile.  I hadn’t been running the race competitively at all up to that point, stepping aside the whole race to let people pass more easily — men and women alike.  But I had hurt so bad for so long, I had been through so much — from the days of puking to this screaming IT band — my competitive flair kicked in.  With a new surge of adrenaline, I ran the last mile in.  Fortunately there were no downhills.  Well, until the very last 50 meters to the finish, a steep downhill that I managed by turning sideways and pony-galloping down the hill.

Aaron was waiting at the finish line, having had a bit of a Sufferfest himself with nasty heel pain.  I was awarded with a fatty Patagonia jacket (Last Shwag), which I absolutely cherish (so warm!).  It turned out Boots was the woman in 6th, and she came in a minute later for a stellar performance of her own.  Priya came in, and Tom and Kirstin also found their way to the finish line (albeit via a self-designed course). 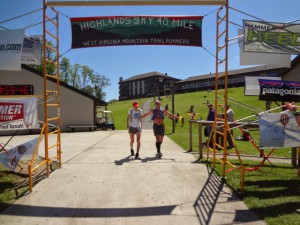 one of these finishers looks happier than the other…..

My friend Kathy was reported ‘missing’ at one point, but emerged as the last runner to make it under the cut-off (a point of great pride).  I think the tougher the race, the more camaraderie everyone feels at the end, and between the bright sun and the fact that none of us had to run anymore, there were high spirits all around.  In the delirium of his post-run high, Luke invited me and Aaron down to Richmond to ride his ponies.  Luke, we will be taking you up on this offer. 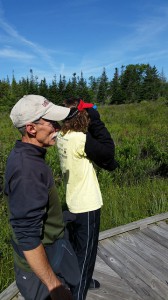 it’s a waxwing party in the bogs

Aaron and I enjoy hosting all the Wussies at the Chophouse.  We particularly liked the post-race bird watching activity with Tom and Kirstin on Sunday morning.  We didn’t see any woodpeckers, but there were bobolinks and cedar waxwings and beautiful yellow warblers.  All the hues are brighter in Canaan than in DC.  I think we should start a Wussies for Warblers sub-club.

2 Responses to Skin and Bones