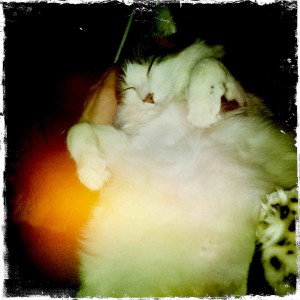 The domesticated cat is an absolute miracle of evolution.  Cats in the wild are fully solitary creatures (except the outlier lion).  Tigers, leopards, bobcats, lynxes, cougars, jaguars, the Middle Eastern wildcat from which domestic cats are believed to be descended…..all these lead solitary existences once they leave their litter-mates. 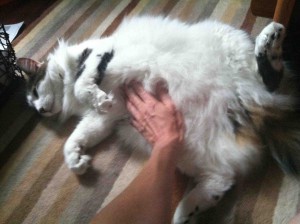 Leda getting the belly rub

So while it makes complete sense that dogs, which naturally are highly sociable animals that frequently live in packs (wolves, African wild dogs, etc.), would adapt themselves well to living with humans, there’s nothing in a cat’s behavioral history that would suggests it could ever make a good pet. 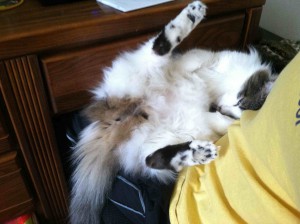 Instead cats were historically kept for their main function as mouse-catchers.  In fact, in the Middle Ages in Europe cats were persecuted for their perceived association with witches.  There’s a theory that the persecution of cats indirectly facilitated the spread of the Black Plague (Yersinia pestis spread via fleas carried by rats) due to the strong temporal association with cat eradications, but the spatial association within Europe appears to be weak. 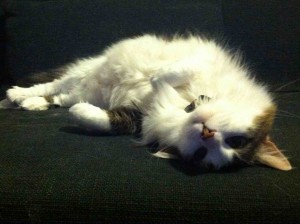 Leda offering her chin for scratchies

Cats of course have long been held in high esteem in Egypt, where they earned bonus points for killing cobras as well as vermin.  Egypt still has some of the largest cat populations in the world. 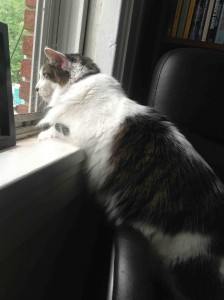 Cats certainly are perfectly capable of a solitary existence if a social opportunity is not available.  But as our dear Leda here demonstrates, cats are flexible, adaptable creatures who can form very strong bonds with humans when they select to.  The key is to socialize cats to humans while they are still in the malleable kitten stage.  The more human handling they have in their first eight weeks, the more likely they are to be comfortable around humans — both familiar and unfamiliar. 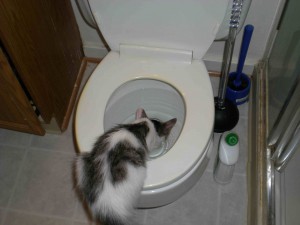 A young Leda intrigued by the toilet bowl

As Joey C and Brit Z can attest, Leda is a highly affectionate creature.  She greets me at the door when I come home from work, she loves laps and cuddles.  There’s only one human Leda doesn’t care for: she is deathly afraid of Bob.