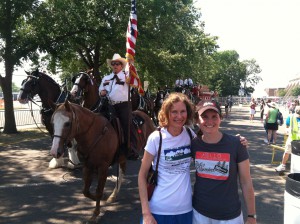 I almost didn’t run the St. Paul Urban Trail Marathon because Aaron and I nearly cancelled our whole August trip to Minnesota.  I had been coaxed to time a work trip to visit the University of Minnesota to coincide with the Minnesota State Fair, purportedly the largest state fair in the United States.  I’ve been studying influenza virus dynamics at the human-swine interface for several years now, so seeing the hog area at the state fair would round out my understanding of human-pig interactions in an ag fair setting.  Oh, and the fair was rumored to host a smorgasbord of delights like donut beer and fried cheese curds.  When we discovered that the St. Paul Urban Trail Marathon (60% dirt/grass trail, 30% bike trail, 10% road) also coincided with the planned visit, well hell’s bell’s, we planned us a pig-marathon weekend! 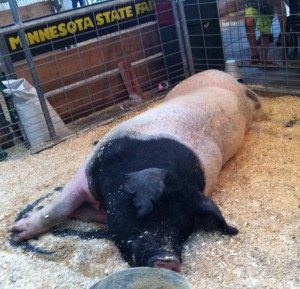 But in addition to getting Lyme disease, Aaron’s company ActivTrax has been going through some big transitions and the timing of a major office move unfortunately coincided with our planned Minnesota trip.  Part of the motivation for the trip was for Aaron to visit Minneapolis for the first time, as I have been seriously considering taking a faculty position at the University of Minnesota at the College of Veterinary Medicine. 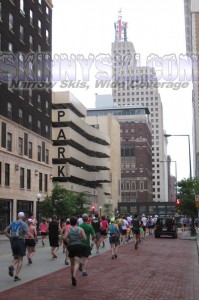 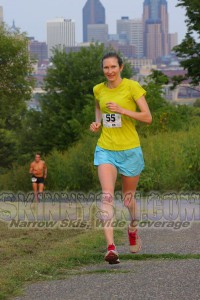 The early course was on bike trail

So we almost cancelled the trip entirely.  But then my old friend Sarah Wright came on board.  Sarah and I met in 4th grade and spent our childhoods playing on all our crazy sports teams together: we played soccer together on the Potomac Red Devils, we were Rec league 7th grade basketball champions (Sarah’s dad was our famously old-school high school basketball coach), we played B-CC High School field hockey together (after freshman field hockey I went on to be a long distance runner; Sarah stayed on to be multi-time Maryland State Champion and captain of the Duke field hockey team), and we did Rec Club ski middle school ski trips together to Wisp, Seven Springs, and Greek Peek.

After college Sarah and I decided to be adventurous and backpack around South-east Asia together for a couple months.  Needless to say, Sarah has many stories about me.  Sarah, myself, and our other high school friend Rosie typically get together every year for a Girls Weekend (see previous Summerfest post).  But Rosie just had a baby and no weekend had been planned for 2013.  So when Sarah said she was interested in driving from her home in Milwaukee to run the St. Paul trail race with me (the 10k version), I ditched Aaron in DC and jetted on over to meet her in Minneapolis. 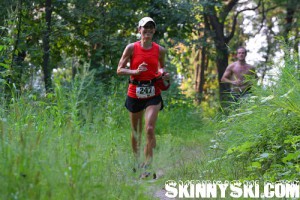 Random person, but I wanted a picture of the nice part of the trail

The race had 500 people spread across the 10k, half-marathon, and marathon distances.  It was a bit tricky to pace because everyone started together, no elevation profile for the course was provided, and the first half was faster bike trail and road and easily tempted you into going too fast before the much hillier second half in Battle Creek Park (although with no elevation profile, you had no idea it would be so hilly).  They moved the race start up an hour because of the heat advisory.  This was only a heat advisory by Minnesota standards: it was in the 70s at the start and crept into the 80s and sunny by mid-day.  But I’m DC heat-trained thanks to Catherines, and I was able to run away with the race in the second half, finishing first overall in 3:07.  I felt very comfortable, relaxed, and there was great camaraderie on the trail from the heaps of exceedingly friendly Minnesotan volunteers, who were particularly excited about a female leading the whole race.  I’m so connected to DC and the running community here and the prospect of moving to Minnesota is so daunting, it meant a lot to  feel welcome and at home in a new city.  Although I need to teach them that the term is ‘chicked’, not ‘girled’. 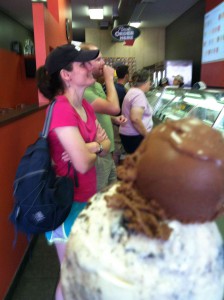 Despite not really training, Sarah cruised to a sub-1 hour 10k and enjoyed her race as well.  Afterwards we met my friend Doug from UMN and his boyfriend Jason and went to The Strip Club for an awesome post-race steak tartar and eggs, followed by ice cream at Izzy’s.  Doug was even kind enough to let me wash my really stinky clothes in his washer rather than let them decay in my hotel room for the next couple days.  Saint Douglas. 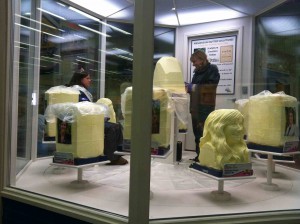 Sarah and I took big naps, and then rallied Saturday evening to meet my friend Andres to enjoy another Minneapolis summer tradition: drinking on rooftop bars.  Even though I’m scared shitless by the Minnesota winter, I am really pleased with the culture of the city — laid back, artsy, good food and drink, people who seem to know how to enjoy simple pleasures in life. 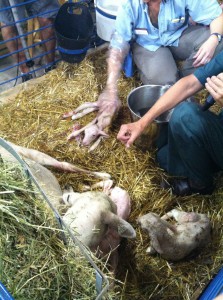 newborn lambs at the ‘Miracle of Birth’ barn

Sunday morning Sarah and I woke up bright and early to beat the crowds to the Minnesota State Fair ‘Miracle of Birth’ barn, where we saw two little lambs and three little piglets born right before our eyes. 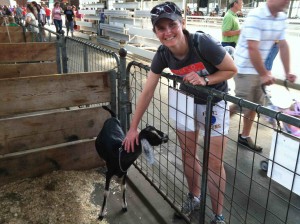 Sarah and the goat

There was lots of crazy food to eat (Marie raved about the donut beer) and competitions to watch (including butter-sculpting), but the thrill of the newborns was by far the highlight of the fair for us.  Just as we were leaving, we ran into the friends we had met at the barn in their full regalia: the Budweiser Clydesdales. 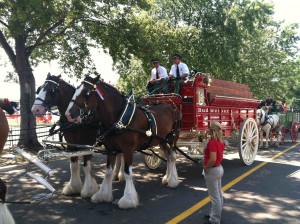 So, wait, why is this blog called ‘Sisu’??  If you notice on the St. Paul Urban Trail Marathon website, the header says Go Sisu.  Minnesota, as you may know, is a mecca for Scandinavians.  I have memories of my Finnish grandmother telling me that I had ‘sisu’ as a child, which is Finnish for something along the lines of ‘strength’ or ‘guts’.  Finns are very proud of their steely reputation for jumping into frozen lakes and holding off the Soviets single-handed during the Winter War.  There is a picture on my wall of my grandmother holding a sign for me along the course of the 2006 Boston Marathon that says ‘Martha Has Sisu.’  A part of me that feels like going to Minnesota is returning to my Scandinavian roots, to the land of Sisu. 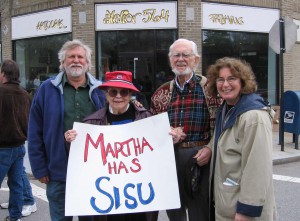 Grandma’s father was a Finnish miler