‘Man, it’s going to be hard for the Beer Mile to live up to the Donut Run, that was so great,’ Mr Andrish mused.

‘Are you kidding?’ I replied with the eye roll Sean’s seen a million times.  ‘The Donut Run was just warm up.  Child’s play.  The Beer Run will be epic.  You’ll see.’ 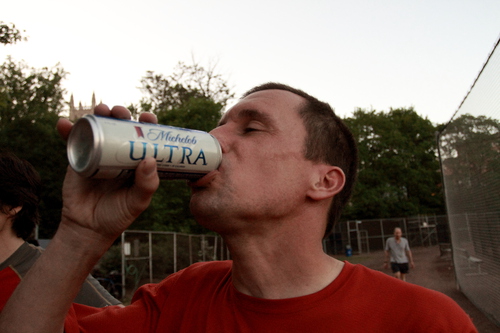 After 12 successful Martha Miles at Penn State (4 per year for 3 years), I effectively retired the show when I moved to DC.  1) I had never actually organized a Beer Mile, I had simply announced when and where and left it to detail-oriented friends to administer, 2) I thought our chances of getting arrested in the District were excellent, and 3) I honestly wasn’t convinced the WUSsies would bite, at least not the Old Guard.

But the WUS group has been morphing steadily over the last year, with lots of fresh new faces, mainly thanks to Jon L-D’s gang (Robin, Adam, and Anna) and Keith’s recruiting from the Arlington track (Sean B, Ryon via Nancy….at least Keith is getting something out of those workouts….), and in this changing of the guard I discerned glimmers of Beer Mile potential. 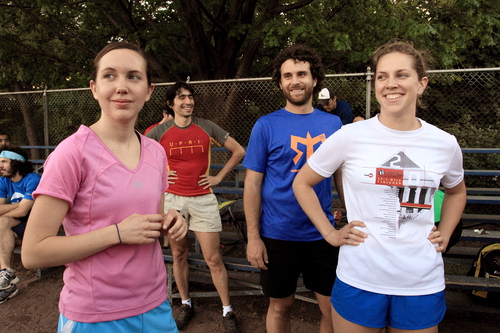 A little more than a month ago, while pacing around the track with Doug and Joe, the mighty Cathedral luminescing against a black sky, I had a vision.  The clouds murmured, the church bells rang, the Beer Mile spirits grumbled, and I realized that I, the girl who doesn’t drink much beer and is about as organizationally inclined as a four year-old, must lead the WUSsies into the land of Carbonated Competition.  Without a second’s delay I announced to Joe and Doug that a Beer Mile would be held on this very track on Thursday, April 28, 2011, the day of my 30th birthday.  I would run it on my own if I had to. 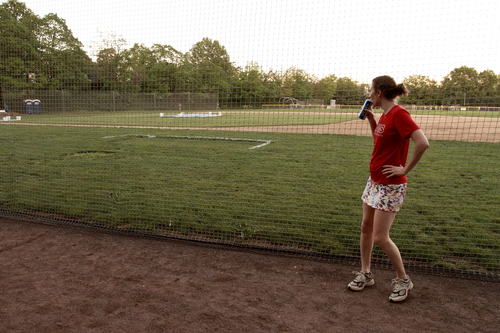 Just how would I lure to the Beer Mile these reluctant WUSsies, whose hair I had to pull just to go to CPBG for Tuesday beer and pizza?  I needed a Poster Boy, someone with élan, charisma, whose name carried respectability and stature and whose endorsement would drive the WUSsies to the track in deferential droves.  Neal seemed more interested in lending his brand to the Donut Run than the Beer Mile, but no matter, that was all part of the plan: lure them all in with donuts and then stick ‘em the next week with beer.  Oh, and make it a Race Series – as evidenced by the Beast, WUSsies cannot resist the draw of the Last Man Standing kind of multi-event competitions. 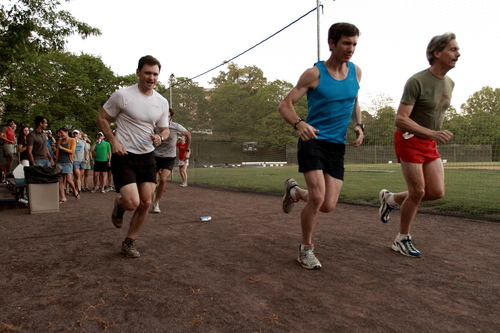 In the Beer Mile, the Early Birds Hurt the Worst

Well folks, the Inaugural Beer Mile sure shook up the bookies — Mario didn’t puke, the CoverBoy was upended, Justine was even beat by my dad, and the Dark Horse Bobby Gill slipped in under the Aaron radar to claim the surprise victory.  Of course I won the women’s, but that is the only known quantity going into any Beer Mile.  There was some chatter about beers for breakfast and disciples of the sensei, but we all knew that was all a lot of hot air.

Due to my impaired organizational skills (as alluded to earlier), it will take some conferring between myself, our timekeeper boy Vishal, and Bobby Gill’s camcorder to post official results.  We know that Bobby won in a mighty 6:57, Neal shortly after in 7:07, and Sean B in third in 7:48, even after having eaten dinner already (rookie error).  I took the women’s race in ~8:45, just behind Adam in 4th (8:40), with Kirstin in second (13:09) and Robin in third, even after her penalty lap (college was a long time ago, wasn’t it, Ms Morrison?).  After much hype about Joe and Michele’s drinking prowess, Michele Harmon finished a glorious last place, and while Joe Clapper insists he beat me, we have a $100 bet riding on the video replay that will show that I actually lapped him (sorry Joe, you probably thought I’d be too drunk to recall that conversation, but there is a whole section of my brain reserved for when there is money on the table).

For prizes the victors received limited edition Martha Mile shirts (Layer 1) and Georgetown cupcakes.  As always, there were not enough prizes to go around, and there were certainly some individuals (like our beer provider Colin) who clearly deserved something more – but I learned well from the Donut Run that when the prizes run out I need to stop talking.  Oh, and I received some special birthday prizes too (sorry, I was way too drunk and giggly to explain the story behind the Playgirl – you’ll have to ask me, Keith, Sean, or Brian on a run some day  what catnip mice have to do with dirty magazines). 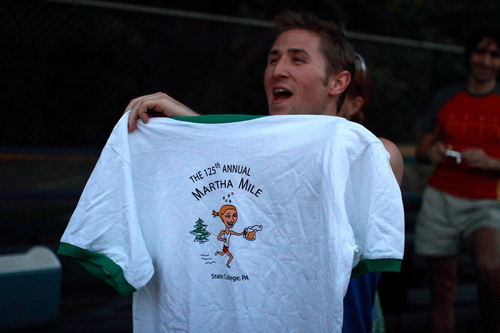 After the run we had a lovely stroll around the Cathedral to Cactus Cantina, where we had far too many pitchers of margaritas and said way too many embarrassing things in front of my poor parents (fortunately I’m convinced that their comprehension fades below a certain level of crudeness – but remind me to next time get chicken or some dish less conducive to teenage boy humor than fish tacos).

Well, WUSsies, that’s a wrap.  Time to start training for next year.  Don’t be surprised if Neal’s next magazine story includes tips for incorporating foamy beverages into one-legged squats.  And maybe we can convince Joe & Michele to offer beer at the Visitor Center aid station at MMT — oh wait, I think they did last year, only some a-wipe volunteer drank it all.  And Ladies, Ladies, we are going to have some training runs this summer, nice little 4-5 milers with a beer every mile….everybody’s gotta learn to burp.

I’m Your Mom and I’m Only Drinking 1 Beer: Jill Nelson

At least made margaritas: Kerry Owens