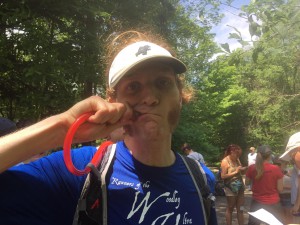 Aaron is adorable even when he’s in misery

Aaron and I have a favorite game we play called ‘Who’s Life is Worse?’  After a long weekend in the Laurel Highlands, we found our game caught in yet another stubborn stalemate.  What was worse, getting injured two weeks before the race and getting to run 0 miles (me), or Aaron making it 40 miles and having to drop out because of the severe bursitis in his heels?

I concede that a DNF is more acute agony.  That moment of defeat, when you throw in the towel, letting your race dreams slip away — that’s gut-wrenching. 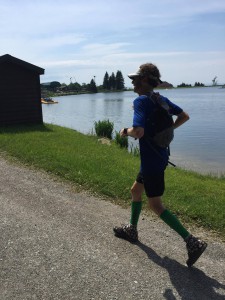 But Aaron will be up and running again by the middle of this week.  He’ll be well on his way to training for the Fat Dog 70 in August, his priority race of the summer.

While I won’t be able to hit the trails for another month or so, possibly more.

I had been talking about Laurel for a year.  I had turned down a paid trip (airfare, accommodation, food) to Oxford University because it would conflict with my plans to run Laurel.

Why was Laurel so important to me?  At one time, many years ago, I had come to Laurel bursting with possibility.  Back in 2009, the Laurel Highlands 50k was my first ultra.  We were having beer and pizza one Tuesday night after WUS and Keith and Mitchel were going up for the 70 that Saturday.  And the next thing I knew I’d signed up to do my first 50k that weekend.  Who needs training?

Race morning wasn’t auspicious.  I got lost driving to the shuttle bus that takes you from the finish to the start and missed it.  I didn’t have a GPS.  I stopped in gas stations at 6am to ask desperately, ‘How do I get to Ohiopyle?’  Laurel is a point-to-point, and driving is not nearly as direct a route as running.  By some miracle I got there 10 minutes before the start, all in a frenzy.

But fortunately Keith had told me everything I needed to know.  There was going to be a big climb at the start.  And I should just run it like a marathon.

And I had my tried-and-true Tom Cali Marathon Nutrition Strategy: 1 clif shot blok every 5 miles.  Took me to a 2:55 at Boston earlier that spring.  The miles along the Laurel Highlands Trail are marked with painted obelisks, so it was easy to pop a blok every 5.

As it turns out, marathon miles ain’t the same thing as trail miles.  One blok every 5 miles wasn’t even close to what I needed nutritionally.  The last 8 miles were so rough.  I felt sick to my stomach.  I stopped eating.  I felt dizzy and dehydrated.  I was barely walking at the end.

But I finished 1st woman, 2nd overall, and set a CR that still stands.  I was 28 years old, full of promise. 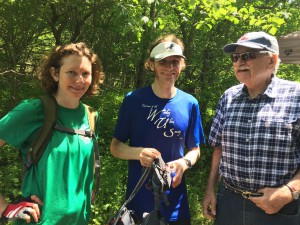 Aaron’s dad finds out what this ‘Aid Station’ thingy is all about.

Seven years later, that promise had all but snuffed out.  I never did much at the ultra distances.  Sure, I had moments of life, a CR at Highland Sky.  But mostly disappointment.  I wasn’t totally dispirited as a runner — even as I aged into the 30s my speed on the roads held nicely.  I just never got it going over the longer distances, mostly because I never even made it to the line.

But two events last summer got my ultra blood rushing again: Manitou’s Revenge and the Teton Crest Trail.  I made a big dark circle on the calendar around the date of the Laurel Highlands 70.  I was going back to Laurel.  Nothing was going to deter me, not tantalizing speaking gigs in Europe, not the training required.

Everything was going great.  Promise Land 50k was a great training run at the end of April.  The next week I had another great training run with Keith/Phil/Julian/Aaron around DC.  Aaron and I got some seriously quality training runs in the Sodds the following week.  And I got one last long run in DC before I jetted off to Belgium.

My first day of work in Belgium was Monday.  I couldn’t walk.  Something in my shin, an injury I didn’t recognize.  It hasn’t stopped hurting since.  I went to the ortho and he gave me his Rx: some serious painkillers and a definitive DNS for Laurel.

My DNS and Aaron’s DNF kind of reflect the larger arcs of our running careers.  My ultra running career has been frustrating, but more in a DNS stillbirth kind of way.  I just never got it going.  Every time I sign up for a big ultra race I get injured and never even toe the line.

Aaron, on the other hand, enjoyed some wickedly good years of ultra running in the late 2000s.  He got out there, hit his stride, and had some monster wins, including Hellgate.  Everyone knows Aaron.  But just as he was flourishing, he came down with Lyme disease, and has never been the same.  Tough to say which is worse, my DNS running career that never even got its legs, or Aaron’s DFN running career that faded unfairly before its time.

Regardless of who’s right, next year we’re just doing the Laurel Highlands Relay. 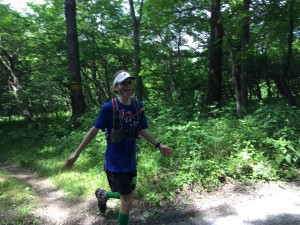 Aaron handles pain better than anyone.