2013: another year, another chance to try to not f&*k everything up Martha Barfa

(Near) Death of a WUSsie

Q. How can a WUSsie score a big bear hug from a random blonde girl on the street?

A. Apparently by almost getting murdered by a beige Nissan on Porter Street in broad daylight.

Seriously, strangers on Connecticut Avenue were crying and hugging me in the street.  They had all seen it coming, probably in slow motion, from their perfect vantage point on the other side of Porter Street.  They saw the beige sedan blow through the red left turn arrow coming south on Connecticut Avenue and swerve left onto Porter, probably above 40 mph, just as I was blithely trotting through the cross-walk with the walk signal in my favor.  The sedan was coming from behind me, so I never saw it until it was an inch from my right hip.  By the grace of the running gods and a couple crucial inches, the car swerved by without contacting me. 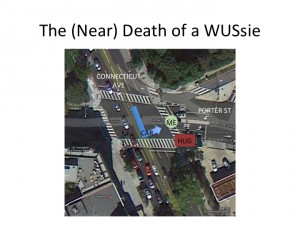 But it was so close.  The pedestrians on the opposite side of Porter stood agape.  I think the near-murder they had just witnessed had terrified them as much as me. When I staggered the rest of the way across Porter, a girl with long straight blonde hair and thick black eye make-up hugged my shaking body so hard I thought she would never let go.  She must have been so relieved that my brains were still in my head instead of splattered on the road.  For nearly half a block people continued to pat me on the shoulder and make sure I was alright.  I was in too much quivering shock to make any response beyond a short nod and ‘uh-huh’.  Being in shock feels like scuba diving, when all you can hear is your own deep breathing, with a blurry world going by in slow motion.

My only regret is that the car was speeding too fast for me to get a license plate number.  I made a police report, and an officer was dispatched to Porter Street speed camera to see if the suspected vehicle had been caught on film.  I told the officer I thought it was a beige sedan, possibly Nissan or Toyota make.

As Sean Andrish can tell you from our Wednesday night runs, I am a magnet for lunatic drivers.  Although today’s incident was by far the most harrowing, this is by no means the first time I’ve been side-swiped by a car while obeying pedestrian law.  We have long joked about this phenomenon, and my attempts to combat my curse by wear bright yellow reflective clothing.  At least I’m a cat lady and get nine lives, although I have probably used up most of them by now.  Today alone counted for at least four.

One Response to (Near) Death of a WUSsie