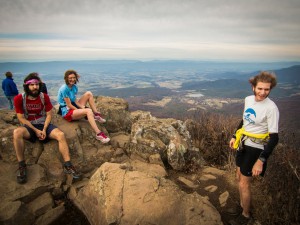 This year’s Vicki’s Death March was graced by a rare guest appearance by the long lost Brian Greeley, who departed last August to begin a PhD in neuroscience at the University of Michigan, much to the chagrin of a Sean Andrish, who is a loyal Ohio State fan and who misses his Twilight Zone watching buddy in the WUS house.  Our Wednesday night runs are decidedly emptier without Mr Greeley, who adroitly defused the skirmishes between Mr Andrish and myself over a range of topics: eg, whether I was going to drive Sean to Korean BBQ that night in Adams Morgan where you’re less likely to find a parking spot than to find Sean cooking a cassoulet in Kerry’s kitchen. 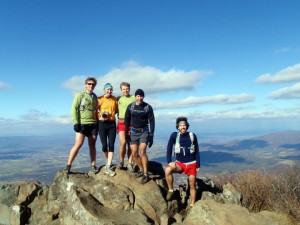 I’ve been nursing a left IT band that was banged up by the Baltimore Marathon and a sore right hamstring that has been over compensating for it, but when Brian announced he was showing up for VDM, I realized I had no choice but to show.  Back in 2010, in the days before wussiest.net, Brian and I had our first iconic VDM with Keith, Amy, Bobby Gill, and John Cassilly.  Between the boulder climb up Old Rag, the sweeping vistas, the fun group and mix of characters, and the perfect post-run burger at the Griffin Tavern, VDM was a run for the ages.

But the decision to run VDM this year came down to the wire.  First I had to get through my Thanksgiving Day 10k Bethesda Turkey Chase without flaring my IT band or hamstring.  Then we had to feel out Thanksgiving night the acceptability of Aaron and I taking off all day Friday instead of spending time with his family, including his brother and fiancee making a rare visit from Los Angeles (they work in the film industry and have intense, chaotic travel schedules that rarely allow for planned visits). 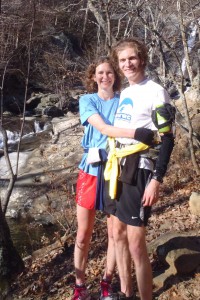 So happy we could come!

I more than survived my turkey trot, setting a 10k PR in 37:11 and winning $125 for 4th place, despite the nag in my hamstring.  Aaron also ran his first 10k race in years, sign that his Achilles is really coming along.  And with Thanksgiving dinner finally winding down, Aaron and I got the go ahead to run our little hearts out and just meet up with the family on Saturday.  At 10pm I texted Brian that we were on!

We had a lovely run: Keith, Aaron, Brian, John Cassilly, and I all ran together (except when I lagged on the uphills — they had a good system of switching off who had to walk in the back with me).

The mountains are even more irresistible when you know you’re supposed to be hanging out with your family. (Credit: Keith Knipling)

With Brian, you could not see him for 10 years and it would be like nothing skipped a beat.  At the sight of the mountains, Brian was like a puppy let off leash (Michigan is flatter than a 12 year old gymnast).  There is no better way to catch up on the last five months of the Life of Bri than a seven hour jaunt through Shenandoah, and the miles whizzed by as I listened to his crazy adventures in India and Nepal (I had warned him about the leeches!!), his new nutty landlady (ain’t no Kerry Owens), fun with MATLAB, and attempts to compensate for Michigan’s shortcomings in elevation by jacking the treadmill up to 15% grade (Brian’s becoming the Wardian of U-Mich).  Brian brings an enthusiasm and loquaciousness* to these long runs that I’ve dearly missed, and I had no choice but to join the chase when Brian called on us to Open it Up! for the final six mile descent.  We were all hurting pretty damn bad by the end, but who can resist when there are Griffin Tavern burgers awaiting?

With the balmy weather, the parking lot party was particularly indulgent, with Doug, Kerry, Q, Tracey, Gary, and Torstin having already fired up the party by the time we arrived (another advantage of VDM and our add-on of the Old Rag part is that the fast folks don’t have to wait around all day for the party to start).  Fortunately the cops seemed more interested in awarding parking tickets than in Gary’s Knob Creek.  After a second thoroughly enjoyable day, it is time to afford VDM the status of Official Thanksgiving Tradition.  See you next year, Brian! 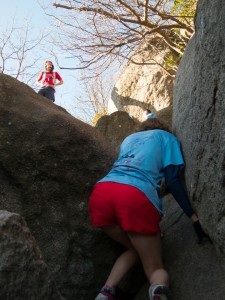 *’loquaciousness’ is not really the right word here.  i find it culturally interesting that most the words describing people who talk a lot have a decidedly negative connotation (‘verbose’, ‘garrulous’, etc.). if anyone knows a term that conveys wonderfully talkative, let me know

One Response to Life of Bri