Guest Blog: Man, I too loved Manitou’s (by Trevor B.) Yay and Boo 2 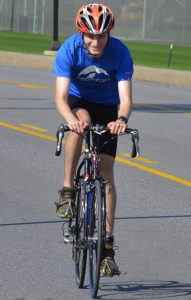 Some people think triathlons were invented as a way for running stores to stay financially solvent.  I think they were invented to make people do sports they really suck at.  And learn to get over themselves.

Aaron glanced over at Penn State’s outdoor pool as he rode by, beginning the bike portion of the Happy Valley Sprint Triathlon under the shrills of AC/DC.  The pool had cool saline water, and was surrounded by a couple dozen people with either a clipboard or a lifeguard buoy.  Aaron could make out just one lonely yellow swim cap still in the pool, thrashing her way from one wall to the other, many minutes after everyone else had vacated for their bikes. 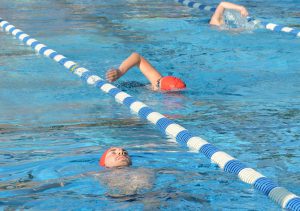 I bet even back-float boy crushed me.

I had warned the three guys sharing my lane that I was a late-entry with no business being in the fifth and fastest heat of the day.  I promised to cling to the lane line and try to stay out of their way.  They periodically hit my feet as they passed, and my attempts to hug the lane line mostly resulted in me hitting it with my elbow a lot, slowing me down even more.  In the end, it took me over 22 minutes to swim 750 meters.  Out of 144 participants, my swim time ranked 122nd.  Since all the slow swimmers had started in heat 1, I was DFL when I came out of the pool, and had a lonely bike ride with no one in sight.

Aaron and I had registered for the event that morning, snagging the last two slots.  Twelve hours earlier, somewhere near Syracuse during our drive from Lake Placid, New York to State College, PA, I had decided that maybe we should change our plan for Sunday morning.  Some of my happiest memories are of running with friends in Rothrock State Park, belting out songs and making crude jokes.  But Tom had reported that no one else wanted to join us.  Something about fly infestations in the forest and prior commitments to volunteer at the Happy Valley Sprint Triathlon.

If everyone else was going to be at the Tri, we decided we might as well too.  We had just spent a week at our friend Michaela’s house on Rainbow Lake in New York, so we had our swimsuits and goggles on hand.  I had my mountain bike.  And we had some really stinky trail running shoes that looked like swamp things after that morning’s 2.5 hour run on the trails around Lake Placid.  After a week of rain, the trails were reduced to puddles in good places and marshes in bad places. 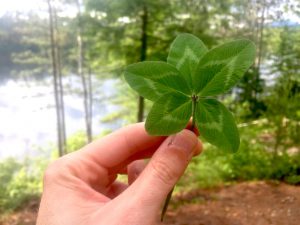 Rainbow Lake is full of surprises

Aaron pointed out that didn’t have a bike.  And we weren’t going to arrive in State College until sometime after 10pm, due to a delayed start after spending most of Saturday morning wading through Lake Placid’s marshes.

No problem!  I promised Aaron the Nittany Valley Running Club (NVRC) would come through for him.  I graduated from Penn State almost a decade ago, and most of the folks I knew from the Biology Department are long gone.  But most of the runners are still there, and it’s a tight-knit community.  So a last-minute email blast to the NVRC produced an outpouring of folks willing to let Aaron borrow a bike for a day.  Our friend Judd, who’d won the Loch Haven triathlon that morning, won the bonus prize for Best Late Night Tri Gear Hookup.  When we rolled into his Lemont home at 10pm, we found him in his garage working on a newly washed Trek road bike.  In addition to the sweet ride, he threw in some gels, some baby powder for the transition zones, a toolkit, a water bottle, and a helmet. 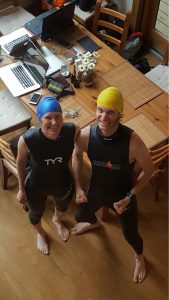 When Aaron and I grabbed some late-night dinner at IHOP, it donned on us that we were actually going to do this thing.  Our week of adventures in the Adirondacks could not be described as ‘tapering’.  On Friday, Aaron had convinced me to swim a mile roundtrip to some island in the middle of Rainbow Lake, more swimming than I’d done all year in total.  And running in the Adirondack mountains is not particularly leg-sparing, with 1,000-foot climbs that the trail decides need to be completed within a half-mile.  On the one day when it wasn’t downpouring, I’d discovered that thick sand is not so easy to bike in.  It was all great fun, and most days required dunks in the lake to get all the mud off.  But it’s not what one would optimally do in the week leading up to the first triathlon attempted in two years.

Aaron and I managed to snag the last two available spots in the HVST by waking up at 4:45am and getting our butts out there bright and early.  Of course, the only two slots still available were in the final heat with the studs.  I suggested we go back to the hotel and sleep another hour, but Aaron has a lot of experience with triathlons and knew it was better to hang out and take our time getting things prepared.  And by ‘prepared’ we mostly mean that we were able to put our incredibly stinky wet shoes out in the increasingly hot sun until they were mostly dry by our heat’s 8:45am start time.  I was enthusiastic about how quickly the sun dried our shoes.  And then realized that sun’s heat would soon be directed at our backs for a couple hours.

Aaron spends a good deal of his life wondering when his wife’s next bout of tears is going to hit.  So it was a moment of great relief when he saw me grinning ear-to-ear and waving enthusiastically on the out-and-back bike ride.  I was dead-last, completely alone.  On a clunky mountain bike that moved like a draught horse in the Kentucky Derby.  But if I was perturbed, I sure wasn’t showing it.  And I tend to show it.

The bike ride rolls along the road that goes to State College’s puny airport.  My ride out was a lot more fun than the ride back, when I was all alone with no one to even wave to.  But it’s a beautiful stretch, with meadows on either side, and in my solitude I spotted lots of birds: indigo bunting, eastern phoebe, american kestrel….

I’ve only done two other triathlons previously.  My first, Luray Triathlon, I got off the bike feeling fresh and passed tons of people during a sub-40 minute 10k.  The second, Anthracite Triathlon, I came off the bike with jello legs and suffered through the hot run.  So with an N of two, I didn’t really know what to expect coming off the bike this time.  But one thing I was absolutely sure of: no matter how I felt, I was going to be alone.  So I enlisted Tom and Mike to run the 5k with me and boost my spirits.

M&T got five-star reviews for boosting my spirits, even if they ran less than a mile with me before complaining that I was running too fast and leaving me to run the dreaded ‘four hills’ on my own.  For a moment, I thought maybe I should slow down and just jog it in with them.  Isn’t that what folks at the back of the pack are supposed to do?  But I hadn’t raced in a while on account of the carb-restricted diet I started in April, which had brought my running to its knees for several months.  I had to skip Manitou’s Revenge in June, and considered that I might never race again.  And then I had an extremely useful consultation with Dr Stephanie Howe-Violett, who added one key tweak to the low-carb diet my endocrinologist had prescribed: permitting me to eat simple carbs during exercise, and 30 minutes before and after.  Because it turns out you process carbs differently when you exercise, absorbing the sugars directly into the muscles and avoiding the insulin spike.  The low-carb diet is still a challenge, particularly to get enough calories each day, but at least this one little change gave my running new life.

I reunited with M&T on my way back from the hills.  They goaded me on for a quarter mile and then threw in the towel again.  But they did their job well, and even at the tail end of the pack, with nothing to run for, I dipped under 19 minutes to run the 4th fastest 5k out of the 144 participants, finishing the HVST on a high note.  My 5k time beat the next-fastest female by 3 minutes and finished 60th overall.  Aaron finished 23rd, pretty remarkable given that he’s done like three bike rides all year. 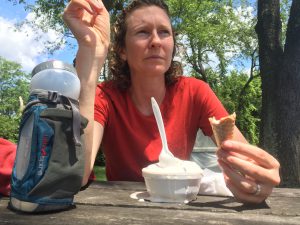 In the end, the HVST was all I’d hoped it would be.  Sure, I stunk my usual self in the pool.  And I was unusually slow without a lighter road bike.  But there’s a warmth and friendliness about the State College community that always makes me nostalgic.  Whether it was Judd adjusting Aaron’s bike seat so it fit just right.  Or Meira unsuccessfully trying to splash me with water at the mile 1 aid station.  Or our post-event finale at Meyer Dairy, the absolute happiest place on earth.  We were in State College for only 16 hours, but I always come out of there feeling more hopeful about the world. 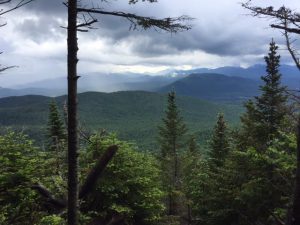 The Lake Placid region has also become one of my new favorite places, and Aaron and I will be returning there at the end of September.  It was, of course, first and foremost a work trip, as Aaron and his co-business owner Michaela had at least three VR shoots that week in the Lake Placid area.  I towed two government laptops along, and had pretty standard work days, complete with 7am conference calls with Bangladesh.  One of these days, Aaron and I will take a bonafide vacation.  Where we actually leave our laptops at home.  And bring at least one outfit that couldn’t be worn trail running.  (I’m still owed a honeymoon…ahem…Pantanal, Brazil….um…..giant anteaters and jaguars…..).  But until that day, I will remain a diehard fan of Noncation. 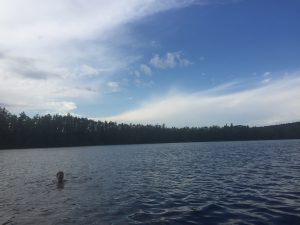