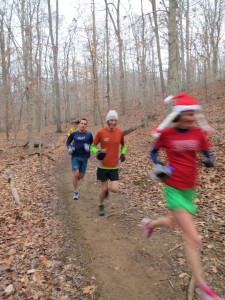 In the days leading up to this year’s MGM, Sean was intent on getting me to run the Do Loop.  For the past couple years, I’ve always considered Fountainhead to be a very appropriate spot for turning my MGM Fun Run around, despite always returning to choruses of ‘What??  You didn’t do the Doooooo Loooooop?  You GOTTA do the Do Loop!’ when I got back to Hemlock.  For a while I imagined that the Do Loop had to be some beautiful scenic place with glorious views to warrant such emphatic endorsement.  So it came as a surprise when Aaron informed me that the Do Loop was nothing more than those craggy series of miserable climbs I ran in the early stages of the Women’s Half Marathon that went by that rusty junk-heap car.  I have less-than-fond memories of battling neck and neck with dear Eliza ‘still hasn’t returned my bladder’ O’Connor on that murderous stretch of trail back in 2011. 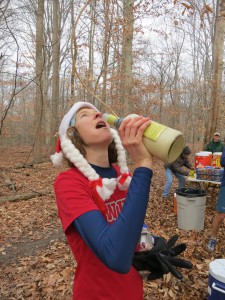 Oh so THAT’s how I tricked into running the Do Loop!

But when I got to Fountainhead this year, we were having such a good time — Sean, Keith, Aaron, Greg Z., Greg Z’s awesome ultra-running beagle-spaniel, and myself — that I continued on to the Do Loop without much cajoling, and ended up running the whole 50k.  Sean and I have been talking about doing a long run together for years now, and with the weather absolutely perfect and plenty of good cheer to go around (Greg Z. can TALK), I decided to strike while the iron was hot.  I particularly liked running the part of the course that overlapped with the Women’s Half Marathon — it was so pleasant to be able to relax and enjoy those stretches of trail, rather than race them with your heart pounding out of your chest.  I have a crazy crisp memory for what I was thinking about during any section of a race: I could recall the exact place in the race where my nose  twinged because I was so sad over my rapidly dying kitty, Waddle, who was diagnosed with feline leukemia on the day of the WHM.

But the take home lesson is: I’m not going to run long because people tell me I should, or because there’s some underwhelming view ahead, or because I’m training for anything specific, or because Sean whines a lot.  I’ll keep going as long as I’m having fun, as long as conversation keeps flowing and people keep laughing at my dumb jokes.  And there are lots of snacks along the way.