‘Interesting choice of a pacer,’ Keith remarked to Aaron on the Friday before the start of the Cascade Crest 100 mile race in Easton, Washington.  For I, his pacer, was most known for being whiny, dependent, delicate, and with zero experience in long races.   On top of that I was having lingering stomach problems from my recent trip to Nepal that nearly kept me from boarding the plane to Seattle.

It has been fascinating to observe the power of preconceived notions and their ability to block out anything that deviates from one’s prefabricated order.  To someone outside of WUS like Monica Ochs, who crewed for CCC female victor Shawna Tompkins and joined Amy and myself in touring the course in Amy’s Civic ‘Bridget’, the natural question within the first hour of meeting me arose, ‘So is the guy you’re pacing your boyfriend?’  To which I answered, ‘Yes, he is, but it’s quite strange, no one knows.  You see, we don’t hide it, we act normally – he walks home with me after each Tuesday night group run, we’ve made numerous references to the ‘extra’ bed we have in our hotel room, and heck everyone knows I’m a princess and here I am flown across the country to wade through mountains for an entire night.  We’ve been waiting for people to use their own powers of inference to call us out on it.  But the closest anyone has come is that someone thought Aaron was showing up to all our WUS runs because he was having a fling with another male runner (who actually was a girlfriend himself).  I guess he gets some credit for noticing and wondering why in recent months Aaron has greatly increased his Tuesday night attendance.  But overall they’re all astonishingly oblivious.’ 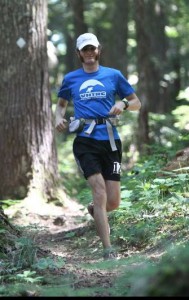 I knew that I would not be particularly adept at crew.  At the first crew-accessible aid station at Tacoma Pass Aaron asked me if I had his bag.  Not only did I not have his bag, but I didn’t even find out what it was he wanted so I could try to dig something up for the next crew-accessible aid station in 10 miles.  All the other crew people were leaping to attention, taking charge, disseminating instructions, asking the runner key questions – kind of how I imagined war would be.  Wives kissed their husbands, friends patted their runner on the back.  You know what I did when Aaron arrived?  I threw my hands in a V and exclaimed, Yea!  And remained standing exactly where I was beside Monica.  Then I admitted I had none of the materials Aaron was requesting and apologized profusely for being worthless.

Fortunately I did have a learning curve as the day and night wore on, and by the mile 68 aid station at Lake Kachess, where I was to start pacing, I had Aaron’s drop bag ready for him as well as extra drink powder mixes and shot bloks and felt proudly organized.  Although externally chipper and unfathomably polite, Aaron was not in great straights when I joined him at mile 68.  As we trotted off up the road to the ‘Trail from Hell’ Aaron explained that he had ‘no up and no downs’ and it was going to be a long 32 miles home with lots of walking.  But I was giddy to be out on the trails, talking a mile a minute as I recounted all the stories from the day, continually gazing up at a black sky freckled with so many stars that it was difficult to make out any of the known constellations (although the 7 tough miles of dirt road with 3,000 feet of gain to No Name Ridge provided more than enough time for us to identify Orion, the Big Dipper, Cassiopeia’s Chair, and the Seven Sisters as we plodded (and mainly walked) along).

It was not easy to watch Aaron navigate the ‘Trail from Hell’, groaning like an elderly patient as he tried to discern the easiest way to sprawl across the multitude of giant blowdowns (apparently late snows had slowed their removal by the forest service).  Always so unshakably positive-minded and rarely expressive about suffering, it was entirely unnerving to witness the pain take over him and his body.  I found myself getting increasingly angry at the course for having so many steep inclines (those damn Cardiac Needles!) that came in such gratuitous droves – couldn’t the trails be more merciful on my poor Aaron??

Somewhere along that relentless 7 mile dirt road climb I began to experience problems of my own in my right foot.  I have a history of coming down with plantar fasciitis when I have run at an unnaturally slow pace to accommodate another runner, something about altering my footstrike and coming down harder on my heels.  The pain alleviated somewhat when we returned to the softer trails after No Name Ridge, where Aaron also found new life and started running again, but I had to dance on my toes to spare the inflamed right heel (although it was impossible to complain too much given the state of Aaron’s much-abused body). 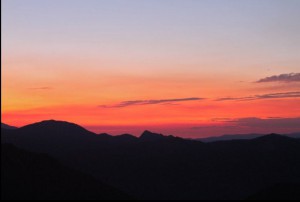 Overall, I discovered that I absolutely love to run in the night – it’s surreal, peaceful, and so beautiful with the clouds of stars and a faint outline of the mountains.  On barely any sleep I never got tired, never took caffeine, never got in bad spirits.  Although I’m still a bit perplexed how female runners plow through the night without imagining killer psycho rapist murderers around every blind turn — I would freak out.

And of course the best part about running through the night is getting to see the sunrise, which Aaron timed perfectly to coincide with the most scenic section of the course between Thorp Mountain and French Cabin, with a red ball of fire glowing over the Alpine Lakes Wilderness and Stuart Range.