Happy birthday, Mario! MegaWUS (otherwise known as The WUS At Which Brittany Was Absent) 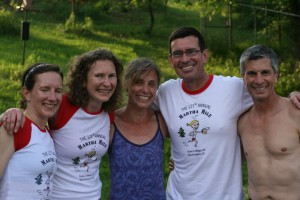 Greg Luna, Tom Cali, Meira Minard, Tara Murray, and I, with the spectator support of Eric & Wendy, Greg’s dogs Alberto and Tecalli, and chickens Esther, Amy, and Emily, completed what will be forever remembered as the most scenic Beer Mile ever, and perhaps the least competitive. 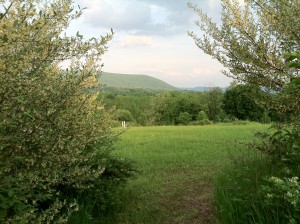 Indeed, no one actually completed the Beer Mile.  We all ran 4 laps, but Greg had 3 beers and Tom, Meira, and Tara each had 2.  I announced from the get-go that my noontime stomach fun (recovery has been slow from Kerry’s Death March) would prevent me from imbibing any beer, but that I promised to get just as entertainingly drunk off of the Wild Turkey and Ginger Ale that Eric & Wendy provided. 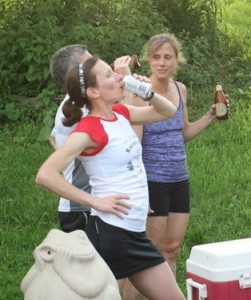 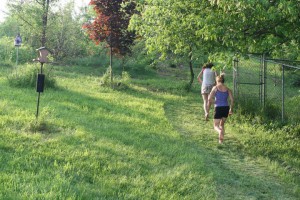 I definitely lived up to that promise, and by the 4th lap I was doing cartwheels, round-offs, summersaults, stealing course cones, pinching cheeks…. 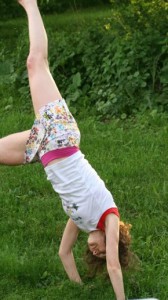 Next time I should wear shorts under my skirt 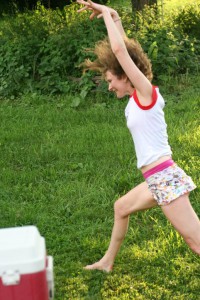 Nails the landing but the medal is revoked for public drunkenness

…and playing with a dog chewy toy that greatly resembled something else – what were you thinking when you bought that, Greg? 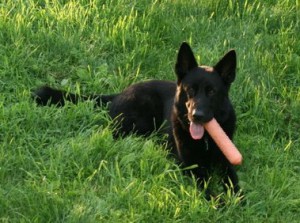 Greg provided fabulous Layer 3 shirt prizes to the ‘winners’ — my cartoon butt also got a good Booty-Pop there. 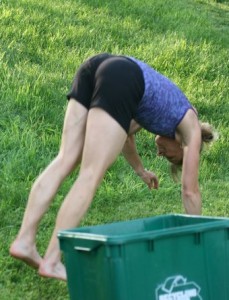 Meira shows her Booty-Pop too

After reminiscing with Justine at Kerry’s Death March about our human pony shows, I couldn’t resist Greg’s dog jump: 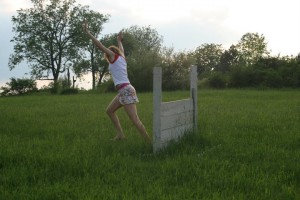 Layer 3 Martha Mile shirts were given to the victors:

Tom also got a prize: 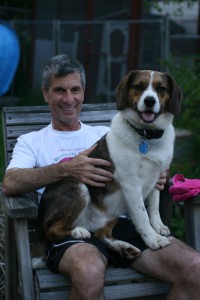 Very Happy Doggy -- but watch that left foot there, Alberto!